A man has made a miraculous escape after he fell from the Club Deck – the top tier of the Bill Struth Main Stand – on Saturday night. 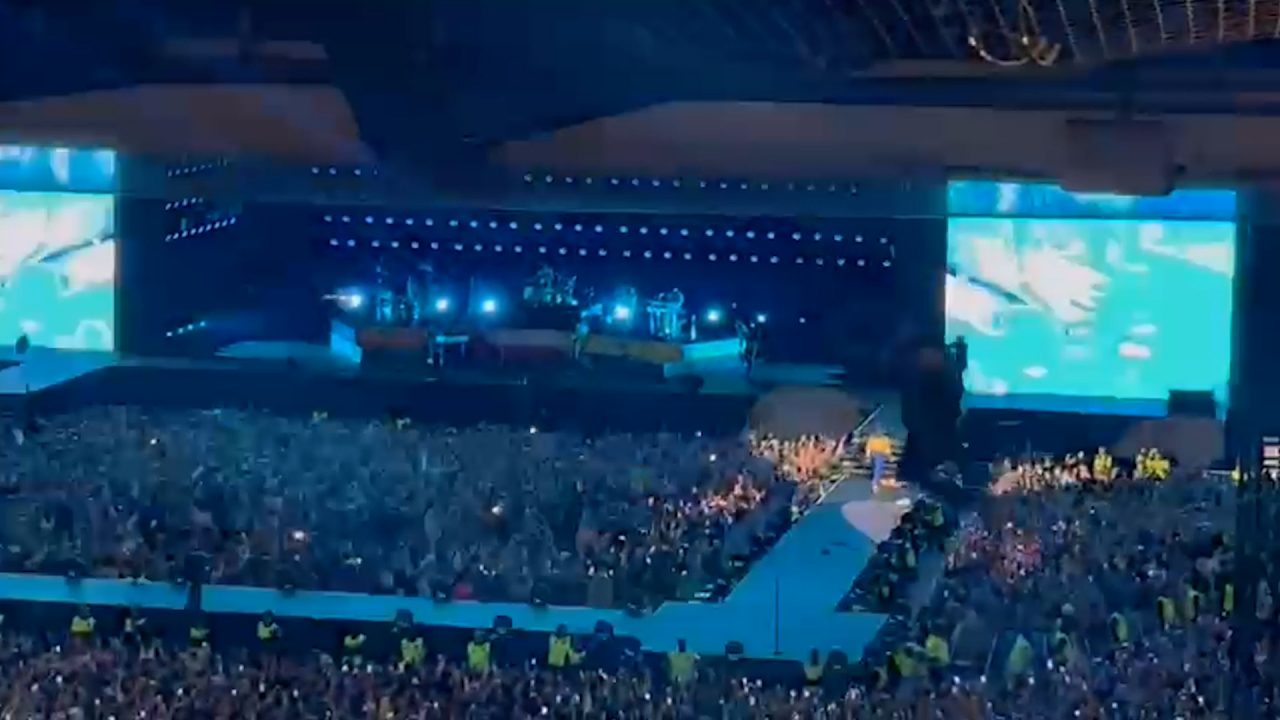 A video captured the moment a Harry Styles fan fell from a stand at Ibrox Stadium during the superstar’s concert in Glasgow.

Horrified revellers watched the man plunge from the Club Deck – the top tier of the Bill Struth Main Stand on Saturday night.

Dylan Wood was at the gig with work colleagues when he accidentally leant against a low bannister and fell over the edge, his mum told STV News.

Marion Hawkins said it was a “miracle” the 20-year-old walked away from the dramatic tumble.

“They said he’s got a head injury, really bad concussion. He’s black and blue, with two black eyes, but apart from that he’s totally fine.”

The Scottish Ambulance Services was called to Ibrox at 9.42pm and Dylan was taken to the Queen Elizabeth University Hospital where his mum said he was placed on life support.

“They put him on the life-support machine to stablise him and his breathing,” she said.

“When he had fallen, he was unconscious. Then he’s panicked and jumped up. Everybody was grabbing him and pulling him.”

The gig’s organisers, DF Concerts, said there was only one individual involved and no one on the deck below was involved or injured.

When he was taken into the care of paramedics, they were able to contact Marion to tell her what had happened.

On Monday, Marion told STV News, Dylan is to be discharged from hospital having undergone scans to make sure he is ok.

“He doesn’t realise how serious it really was. I think it will hit home how close it was to being a different phone call to me – how he could just not be there.

“It was a freak accident. Police came to the hospital. They had to stay to make sure it wasn’t foul play. They checked CCTV and could see it wasn’t anything to do with anything else.

A spokesperson for DF Concerts said: “I can confirm that there was only one individual involved and no one on the deck below was involved or injured. We are seeing reports on social media from the gentleman’s family that he is doing well.”

Police were made aware of a man falling from the stand at around 10.15pm.

Officers said there were no suspicious circumstances regarding the incident and confirmed the man was seen to by medical staff.

A spokesperson for the force said: “Officers were made aware of a man falling from a club deck at a premises on Edmiston Drive, Glasgow at around 10.15pm on Saturday, June 11, 2022.

“There were no suspicious circumstances and the man was seen to by medical staff.”