Matt Grant was delighted The White Stripes frontman wanted to step in and help after hearing about his plight. 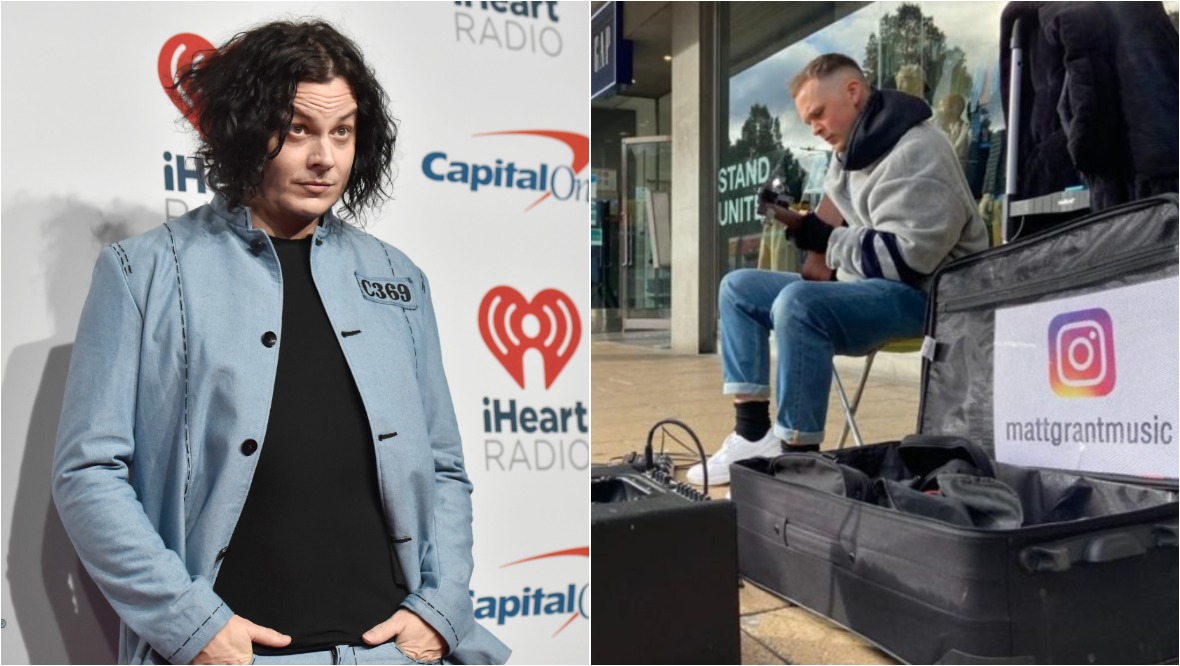 An Edinburgh busker who had his guitar smashed up by a drunken stranger is delighted after singer Jack White stepped in and bought him a new one.

Matt Grant, 26, said he felt, “like a kid in a candy shop,” when he walked into Guitar Guitar in Edinburgh and discovered The White Stripes frontman’s manager had been trying to track him down to buy him a new instrument.

Last week Matt says he was setting up to busk on Edinburgh’s Princes Street when a drunk woman came up to him and started accosting him and swearing.

“I tried to tell her where to go and next thing I know she’s got my guitar in her hand, swinging it over her head, it comes down on the pavement and…crack,” he said.

“I was gutted, totally gutted.

“I was trying to hold back how terrible I felt. I didn’t want people to see me in tears but that’s my livelihood. It was scary.”

Matt took to social media to set up a GoFundMe page for a new guitar, with a target of £300.

But within 24 hours, his story had been seen all over the world and he’d raised more than £4000.

“Before I knew it there were comments from all over the world and people saying, ‘what’s your Paypal?’ I closed it the day after at about £4000.

Overwhelmed at the generosity of strangers, Matt picked out a replacement guitar from GuitarGuitar in Edinburgh and was due to collect it the next day.

But his luck wasn’t over yet as Seven Nation Army singer White had seen Matt’s story and set about tracking him down to buy him a new guitar.

“We got a phone call just after we opened from Jack’s manager, wondering if we’d heard Matt’s story,” said Chris Cunningham from GuitarGuitar Edinburgh.

“Jack’s manager had said he was trying to track [Matt] down and thought the easiest way to do that was to phone around the guitar shops in Edinburgh.

“They said if Matt comes in, can you pass over my phone number? Low and behold, half an hour later, in comes Matt.”

When Matt arrived to pick up his replacement guitar, he was put on the phone to Jack White’s manager to hear the amazing news.

“Matt was absolutely bowled over,” said Chris. “I don’t think he could believe it, it took a while to sink in that the person on the phone was actually Jack White’s manager.”

Having explained that he had already bought a replacement guitar, Jack’s manager replied: “Well, buy another one! Jack White wants to buy you a guitar.”

“I thought, that’s awesome, and I’m looking around like a kid in a candy shop.” Matt said.

Now Matt is back busking on the streets of Edinburgh, he plans to give back to musicians who have been affected by the coronavirus pandemic.

“So the plan is to do a fundraiser, I’m going to put in £500 of my own money from the GoFundMe and we’re going to busk all day, me and some friends, to help musicians who’ve been affected by Covid-19.”

Matt wants to turn what was a frightening and negative situation into something positive, and has even added Seven Nation Army into his setlist as a thank you to the rockstar.