Footage shows stunt actors racing on motorbikes through the village of Glencoe. 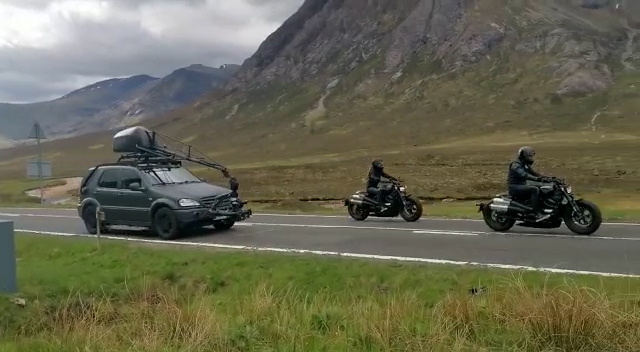 The Indiana Jones movie crew have been spotted filming a high speed motorbike chase through the Highlands.

The plot of the new Indiana Jones 5 has been kept tightly under wraps.

However, photos of stunt actors racing on motorbikes through the village of Glencoe give a first insight into the secret plot of the new film.

Two stunt workers can be seen racing each other on motorbikes which appear to be from the World War Two era, behind a vehicle with a large camera rig.

A third can then be seen joining the two, riding what looks like a Harley Davidson motorbike, appearing to give the actors directions.

The scene was being filmed earlier this month with the stunning backdrop of the Buachaille Etive Mor mountain behind the speeding bikes.

Tony Featherstone, 40, was returning home from a wild camping trip and had pulled into a layby for breakfast when he spotted the high speed chase.

He,said: “I was enjoying breakfast whilst looking up at the beautiful Buachaille Etive Mor when I noticed the road was being closed on either side periodically to stop traffic.

“Each time the traffic was stopped, two motorbikes would travel down the road alongside a vehicle with a large camera rig attached to it.

“They’d stop at carparks on each side before getting off the bikes and interacting with the crew.

“At times, there was someone on a third bike – a Harley Davidson, I think – but this guy just seemed to be giving directions to the two actors.

“The scene involved two people – a man and a woman – and the focus of this seemed to be to capture them racing alongside the Buachaille Etive Mor mountian.

“As well as the camera vehicle, there was also a drone capturing aerial footage at times too.

“We were right in the middle of the shoot. No one else was being allowed through during filming but because we were already there, we couldn’t move, so we stayed and took photos for around 40 minutes.”