Schoolgirl refugee tells how she plans to stay in Scotland and study. 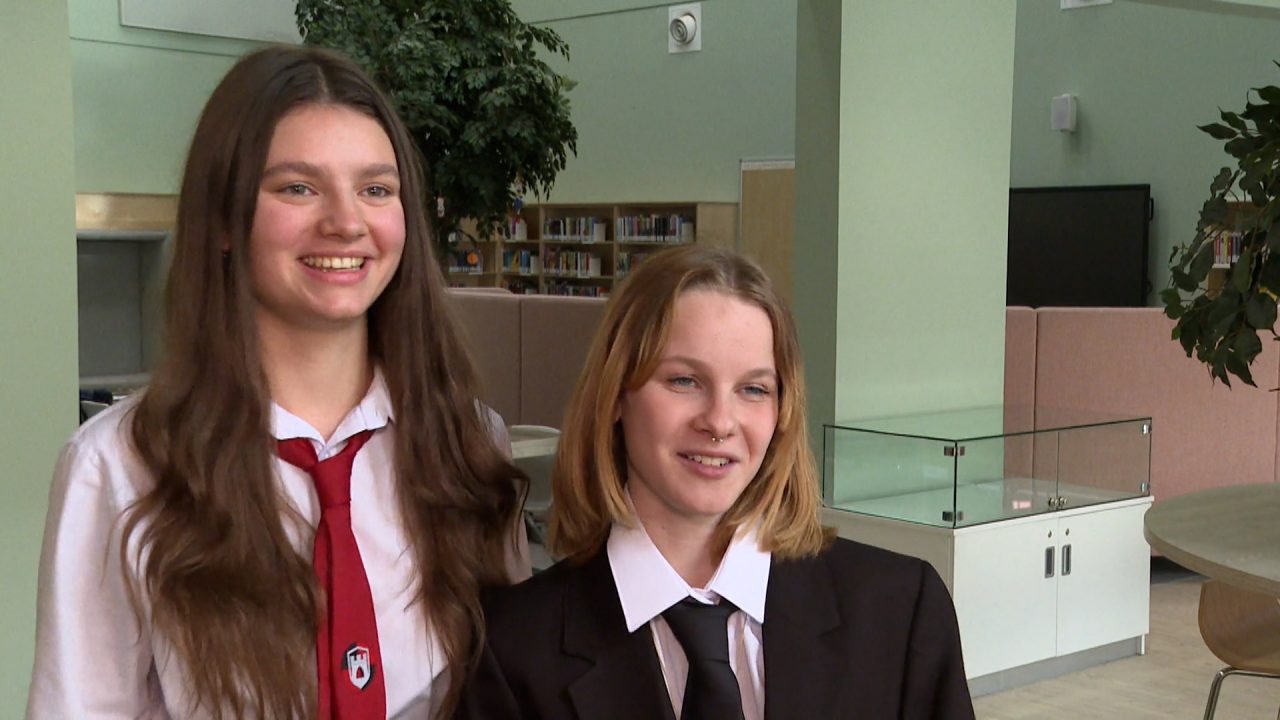 A hub which helps Ukrainian refugees settle in Scotland has welcomed its 10,000th person.

The centre, inside a bank building in Edinburgh, helps newcomers find accommodation and healthcare, providing support to 90% of all refugee arrivals in Scotland.

The milestone was achieved on the same day Russian missiles struck cities across Ukraine, including the capital Kyiv, as world leaders discussed the invasion at the G20.

Kyiv is the home city of 17-year-old Dasha Baksheeva, a sixth-year pupil at Castlebrae Community High School in Edinburgh, who is among those helped by the hub, which is based at Gogarburn House.

Dasha has been in Scotland for around five months and told STV News she planned to stay and study.

“I have no need to go back home, I’ve finished school there,” she said. “I have my family there, but I’m going to stay here, I enjoy it.

“I want to help Ukrainians who don’t speak English.”

One her best friends at school is 14-year old Ahlaia Shevchenko, who she first chatted with in 2019 on a Michael Jackson fans’ forum.

The pair’s friendship has forged in Scotland – even though they never met in-person in Ukraine.

Dasha said: “I posted a story on my Instagram that I was in the National Museum of Scotland, and she (Ahlaia) was like ‘oh my god, are you in Scotland right now?’. So I said, ‘ok, let’s meet each other.’”

Ahlaia arrived in Scotland five months ago from the southern city of Kamianske, with her brother Kharyton and mum Anastasiia.

They’re currently living with a host family in Edinburgh, but would like to eventually get their own place.

“It was when I lost my job because of the war that I decided to go,” Anastasiia told STV News. “I was a massage therapist, and now no-one needs one. I am divorced and I need money for my children.

“We would like to stay here because this country helped us. People here are similar to Ukrainians, they are open hearted and kind.”

Anastasiia is about to start a new job soon with Castlebrae High, helping Ukrainian students get settled.

Castlebrae currently has more than 80 Ukrainian students enrolled, out of a total pupil population of 500.

Head teacher Norma Prentice said it had been a learning curve.

“Every day is a school day, we’re learning about one another’s cultures, but it’s been really interesting,” she said.

“They’re settling in really well. Despite the background and difficult conflicts they’ve been through, they’re enjoying life in Scotland.”

Ukrainian pupil support teacher Hannah Dellanzo has been a “mother figure” for many of the children, receiving daily hugs from many of them.

She said: “I think we hoped there would be an opportunity for some of them to go back, but the harsh reality is it’s probably not an opportunity they’ll get soon.

“We just need to make sure they’re safe and happy while they’re here.”