Funeral cortege travelled through Scotland to the Palace of Holyroodhouse. 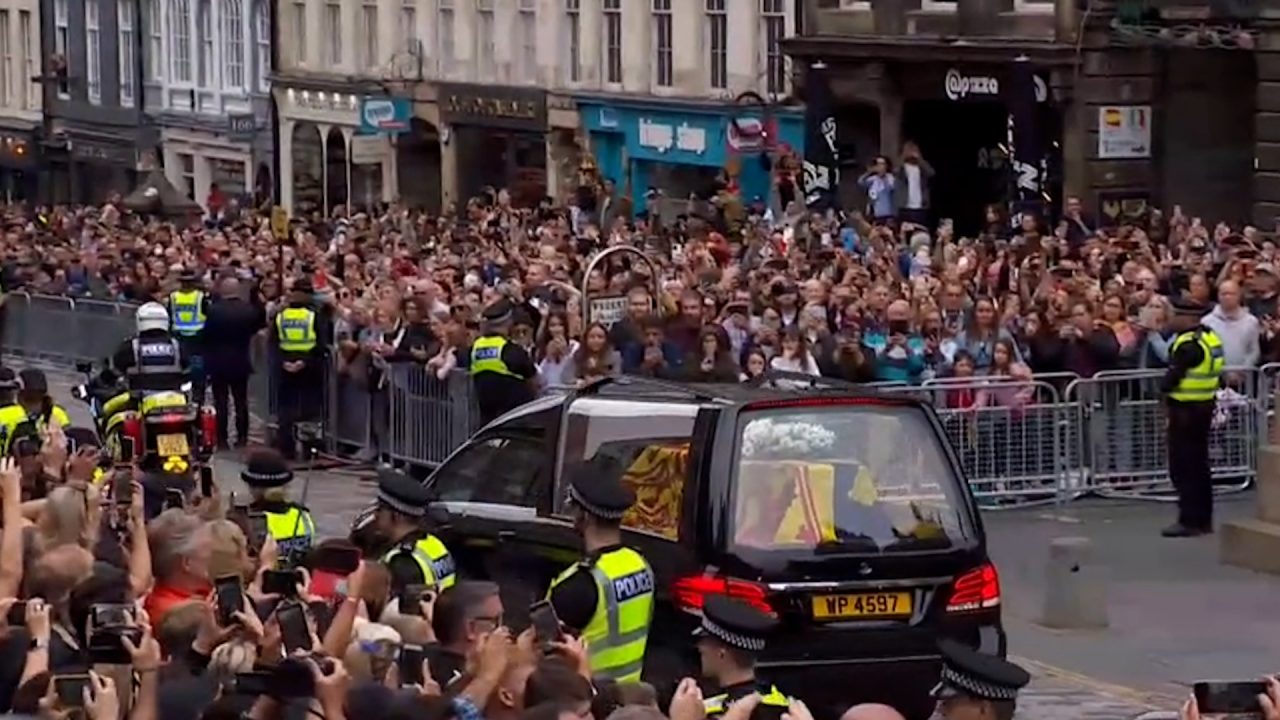 Thousands gathered to pay their respects as the hearse carrying the Queen’s coffin arrived in Edinburgh.

The royal cortege left Balmoral Castle – where she died on Thursday – on Sunday morning and travelled by road through Scotland, arriving in the capital just after 4pm.

Huge crowds watched as the hearse went down the Royal Mile and past the Scottish Parliament, into her official Scottish residence, the Palace of Holyroodhouse.

The coffin will stay overnight in her official Scottish residence before being taken on a procession to St Giles’ Cathedral on Monday, where she will lie in rest for 24 hours.

As the royal convoy travelled down the Royal Mile, the crowd fell silent in respect for the Queen, before moments later, a round of applause and cheers broke out across the crowd.

Her coffin was met by the Duke of York and the Duke and Duchess of Wessex and received a guard of honour by the King’s Bodyguard for Scotland (Royal Company of Archers) as it entered the palace.

Around 50 members of palace staff had gathered in the courtyard to greet the Queen’s cortege. The guard then left via Queen’s Drive.

James Kinlock was one of those lining the streets and said he felt an “enormous pull” to watch the procession through the capital.

“I didn’t expect to feel compelled to come but I did and I’m very glad I came,” he added.

At the junction of North Bridge and the High Street, people stood on the steps of Tron Kirk and sat on windowsills of nearby shops to catch a glimpse of the procession.

Mr Kinlock said: “I’m absolutely stunned. I have never seen the Royal Mile this busy and I doubt I will ever see it this busy again. It’s just incredible. Absolutely incredible. And it is an honour and privilege to be here with everybody.”

Ukrainian refugee Daria Oskolkova said she turned out to see “the Queen off on her final journey” as her coffin made its way along the Royal Mile.

“It was very emotional to be here,” said the 38-year-old who now lives in Glasgow.

Adriana Vraghici, from Edinburgh, described the event as a “monumental day”.

“The Queen has been part of our lives for so long, it’s just nice to be so close, seeing the coffin, because she has been such an important part of our lives,” said the 25-year-old, who added: “She has served the country in such an amazing way”.

The cortege left Deeside around 10am on Sunday and travelled through Aberdeen and Dundee en route to Edinburgh.

Streets were lined with wellwishers as thousands paid their respects. There was applause as the hearse passed people gathered on a roundabout of the A90 outside Dundee.

One man called out “thank you, thanks you” as the coffin went by.

Gillian Nicholl, from St Andrews, who had come with her children Romy, 22, and Freya, 15, said: “It went very still and it was very atmospheric.

“I have never seen such a large crowd go so quiet. It was very sombre, there was a wee clap, but it didn’t feel right.”

Freya said: “She was the last Queen we will see in our lifetime, so this was definitely history-making and it was nice to be there.”

Margaret Macphail, from Berryhill, wept as she thought about what she had seen. She said: “I didn’t expect to be as moved as that. I’m glad I came.”

Her friend Elizabeth Russell, from Invergowrie, added: “It was lovely to be here and it was so nice that so many people came out.”

On Monday, King Charles III and the Queen Consort, and other members of the royal family, will take part in a procession up the Royal Mile to St Giles around 2.30pm.

A service reflecting on the life of Elizabeth II will then take place, with Prime Minister Liz Truss among those in attendance.

At 5.40pm, the King and Queen will attend the Scottish Parliament to receive a Motion of Condolence.

Joined by other members of the royal family, they will mount a vigil at 7.20pm at St Giles and stay in Edinburgh overnight.

The Queen will lie in rest at St Giles with members of the public allowed to file past her coffin from 5pm, before she is flown back to London on Tuesday afternoon, ahead of her funeral on Monday, September 19.