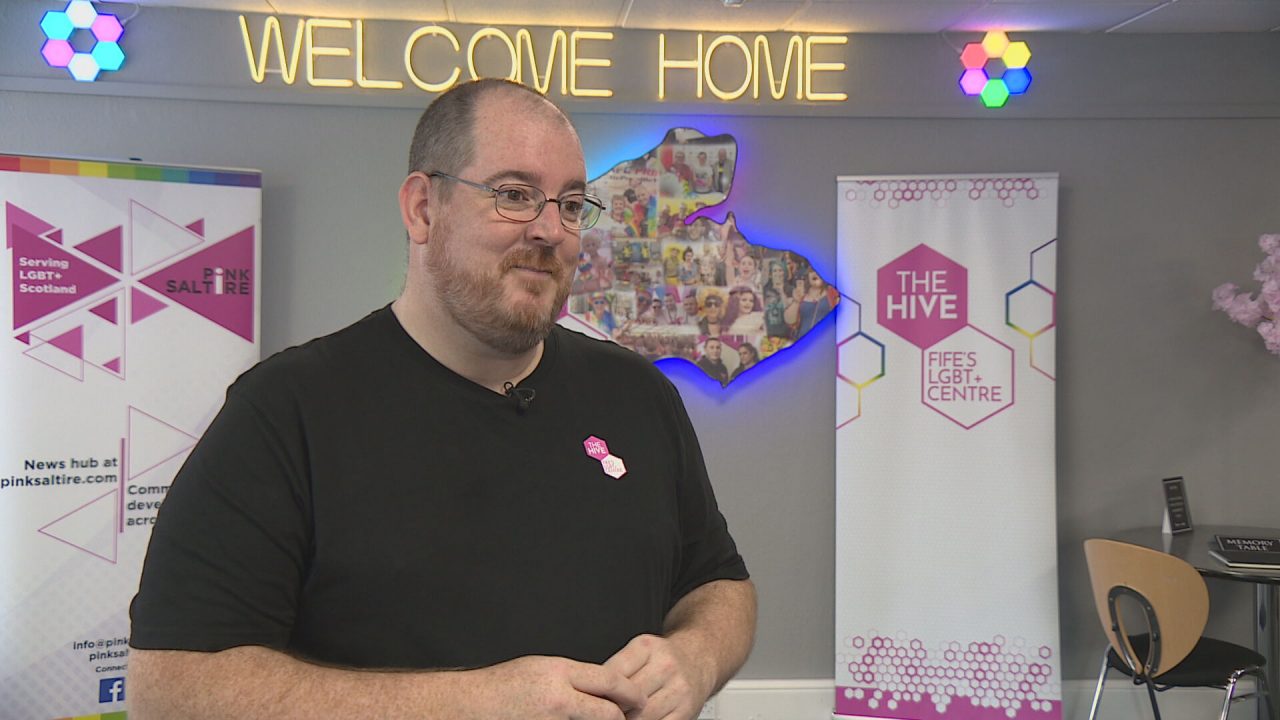 A new LGBT Hub has opened up in Kirkcaldy and it’s the biggest of its kind in Scotland.

After two years of development, charity Pink Saltire opened the dedicated centre which aims to be a safe space for the LGBT+ community

Over £50,000 was raised to transform the former Goldberg’s department store, which had lain empty since 2016.

The new community centre boasts a range of facilities including a cafe, recording studios, a meeting room and offices.

Pink Saltire’s founder Stuart Duffy wanted to create a space where the charity can deliver services which meet the needs of an ‘already marginalised community.’

He told STV News: “It’s a place that people really need to feel that they belong and that’s why we have a welcome home sign.

“I think it’s something that we are really keen on, that people feel that they belong here and it’s a second home. If they can’t be themselves at home – they can be themselves here.”

This sense of belonging is important to service user David, who has been bullied in the past for his sexuality and learning disability.

David said: “You can get a lot of bullies and trouble from different folk too, but at least I know here it’s a safe space and I can just relax and chill out, without anyone picking on me or saying things that are not nice to me.”

One of the first volunteers now working at the Hive is 26-year-old Jaxon McCallum, who identifies as a transgender male.

He wants to use his experience of growing up LGBT+ in Fife to offer support to others that may need it.

He said: “I started high school and I was a bit like, ‘there is something not quite right.’

“I’d be trying to fit in but it just wasn’t happening. It wasn’t until four years ago that I was like ‘yeah this is what I am,’ because the quicker I could get away from my old self, the better it was making me feel.

“You see a lot of different people and it’s great to chat to some of them and even help some of the parents who are not too sure on what services they can go to if their kids are transgender.”

More than 30 organisations including Fife Council, the National Lottery Community, the Scottish Government and Fife Cultural Trust came together to donate funds to open the Hive.

The centre will become a base for a number of new services and events aimed at LGBT+ people in the area.

The charity has also worked with the Russell Trust to provide a food pantry offering essentials and sanitary items to those who may need them.