When the Queen met a 'cheeky' duck during farm visit

The Queen was accompanied on her walk by a 'mischievous' duck named Olive. 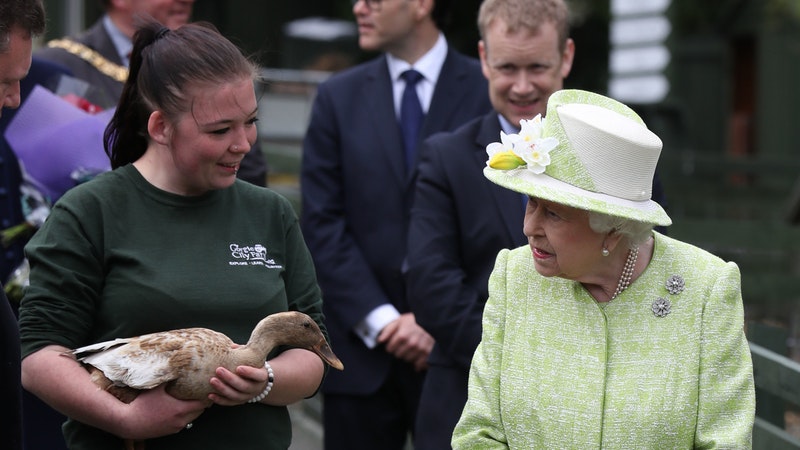 The Queen famously had a lifelong love for animals, from her cherished corgis to her passion for horses.

And three years ago, she concluded a visit in Scotland with a visit to Gorgie City Farm in Edinburgh, where she was joined by a “cheeky duck who thinks she’s a human”.

The “very interested” monarch spoke to volunteers, staff and community groups who use the farm and was presented with gifts and flowers grown in the gardens.

During her walk through the animal enclosures, the Queen was accompanied by one of the farm’s most-loved residents – a duck named Olive, who was known to wander out of the farm and get on a bus.

Farm worker Maia Gordon escorted the “mischievous” duck ahead of the monarch and told her about Olive’s attempts to board buses in the city.

Ms Gordon told STV News: “It’s a once in a lifetime opportunity and a bizarre moment. I never thought I’d be meeting the Queen and walking a duck with her, but it was brilliant, lots and lots of fun.

The four-year-old duck was “not very keen on the rabbits and guinea pigs” but loved people and “thought she was a human being”, Ms Gordon explained.

She said: “She used to be a free-range duck, but kept on trying to make her way down to the bus stop and once made it onto the number 25 bus and had to be escorted back to the farm by the rather confused driver.

“She goes for a walk every day with volunteers and staff members because she loves to get out and about.”

The Queen’s visit to the farm, which was twice saved from closure in 2016 and 2020, was described as a “great honour and recognition” by its chief executive Iain Herbert at the time.

Mr Herbert said: “Everybody’s inspired by her coming here and I think it’s recognition of the work our volunteers do.

“The farm’s been here for 40 years and it’s had good times and bad times, but today’s visit was a great honour and recognition and it gives that inspiration to the workers and volunteers, as well as being a real privilege.

“The Queen was very interested and was talking about the animals, their welfare and understanding about people working with the animals.

“She had lots of questions about the chickens on the way round.”

On her tour, the Queen also stopped to speak to four women who were spinning wool from sheep on the farm.

The spinning group were formed alongside the creation of the farm and one member, Joan McGowan, said: “She was delightful and so charming, so interested in what we were doing. I’m so honoured and happy that she stopped to talk to us.”

Moira Black was one of the volunteers who handed a bunch of flowers to the Queen and spoke to her about having volunteered at the farm for 20 years.

Describing how she felt to meet the Queen, Ms Black said: “It was amazing, the best feeling in the whole world.

“I felt very privileged to meet her, very honoured. I’ve waited my whole life to meet her, ever since I could crawl and walk.

“My mother brought me up to love the Queen and I love her to bits.”

As for Olive the duck… well, she died just few a months after meeting the Queen, tributes describing her as “one of the best examples of what we want the farm to be”.