Firefighter in critical condition after blaze at former Jenners store

Five emergency responders are in hospital after the fire at the category A-listed building in the centre of Edinburgh. 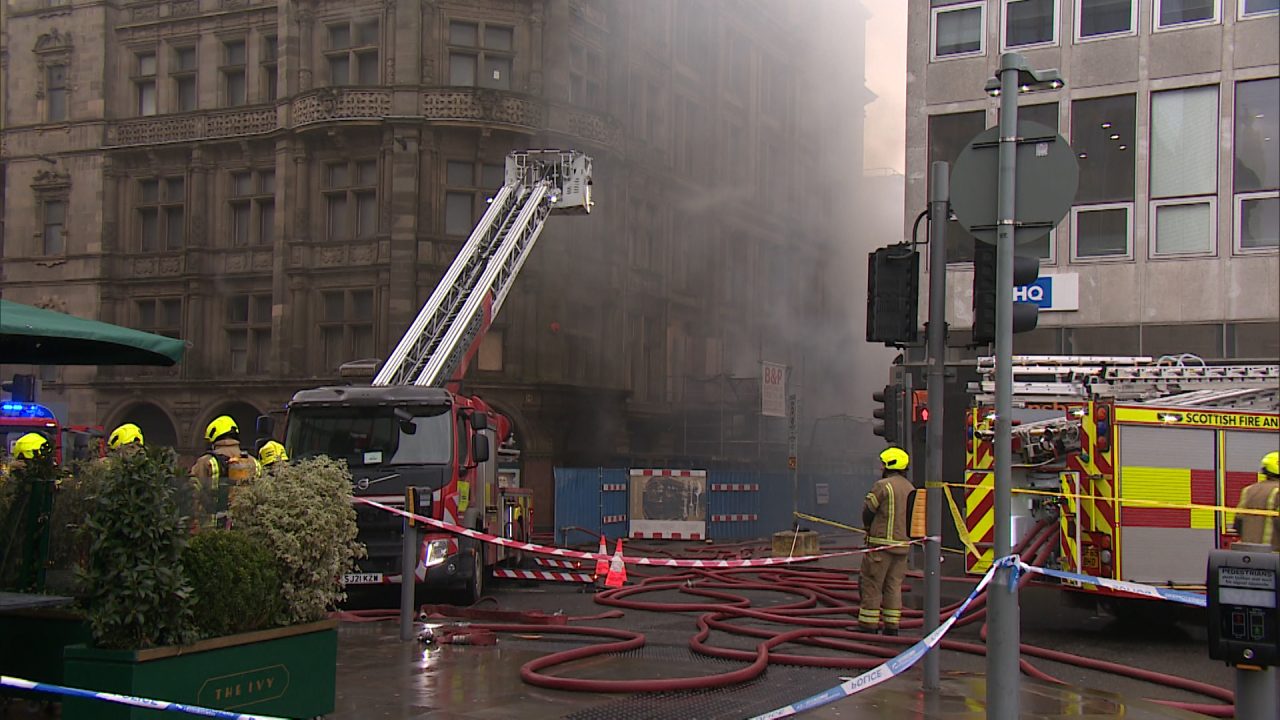 A firefighter is in critical condition after being seriously injured while tackling a blaze at a former department store in Edinburgh.

Five emergency responders have been rushed to hospital as a result of the operation at the former Jenners building.

Around 50 personnel were tackling the blaze in the category A-listed building at one stage on Monday after the alarm was raised at around 11.30am.

The Scottish Fire and Rescue Service (SFRS) said ten appliances including height and reach vehicles had been deployed to help fight the flames.

One emergency responder is now said to be fighting for his life after sustaining injuries in the blaze.

SFRS interim chief officer, Ross Haggart, said: “The fire at the Jenners building in Edinburgh is a very serious and complex incident and regrettably I can confirm that five of our colleagues have been taken to hospital for treatment and one remains in a critical condition.

“The families of all those affected have been made aware.

“We currently remain at the scene with a total of 11 appliances and other specialist resources in attendance.”

It is expected that the roads and footways at Rose Street, St Andrew Square, part of George Street, and South St David Street could all remain closed for a few days while structural assessments are carried out.

Bus routes have also been diverted while the operation to extinguish the flames continues.

The building – which housed Jenners for over 100 years before its closure in May 2020 – is undergoing a multi-million pound renovation backed by Danish billionaire Anders Holch Povlsen to turn it into a new hotel and leisure facility.

Plans approved by City of Edinburgh council in June last year will turn part of the former department store into a 96-bedroom boutique hotel, alongside a bar and restaurant, above overhauled shopping areas.

One eyewitness, Gillian Webster, described smoke “streaming” out of the building before firefighters arrived on the scene.

“The smoke was blackening. It doesn’t look good for an old building.”

A Police Scotland spokesperson said: “The fire is now under control. There is no wider risk to the public and emergency services remain at the scene.

“Five firefighters have been taken to the Royal Infirmary of Edinburgh for treatment.

“There have been no further reports of injury at this time.

“Three commercial properties nearby were evacuated as a precaution.

“A number of roads in the area have been closed as a result, including one lane eastbound on Princes Street and the east end of George Street.

“Enquiries into the cause of the fire are continuing.”

He added: “It’s so sad to see a fire at one of Edinburgh’s most iconic buildings.

“Council officers remain on the scene and are supporting the emergency services and those affected by the fire.

“Understandably, there have been a number of road closures in the area, which has affected transport in the city centre. Please keep an eye on travel messages to make sure you’re up-to-date with any changes to your journey.

“Hopefully the damage to the building will be minimal so that restoration work can continue and the building can be enjoyed for another 100 years – and beyond.”