The former striker and manager's major contributions to football, charity and society were honoured. 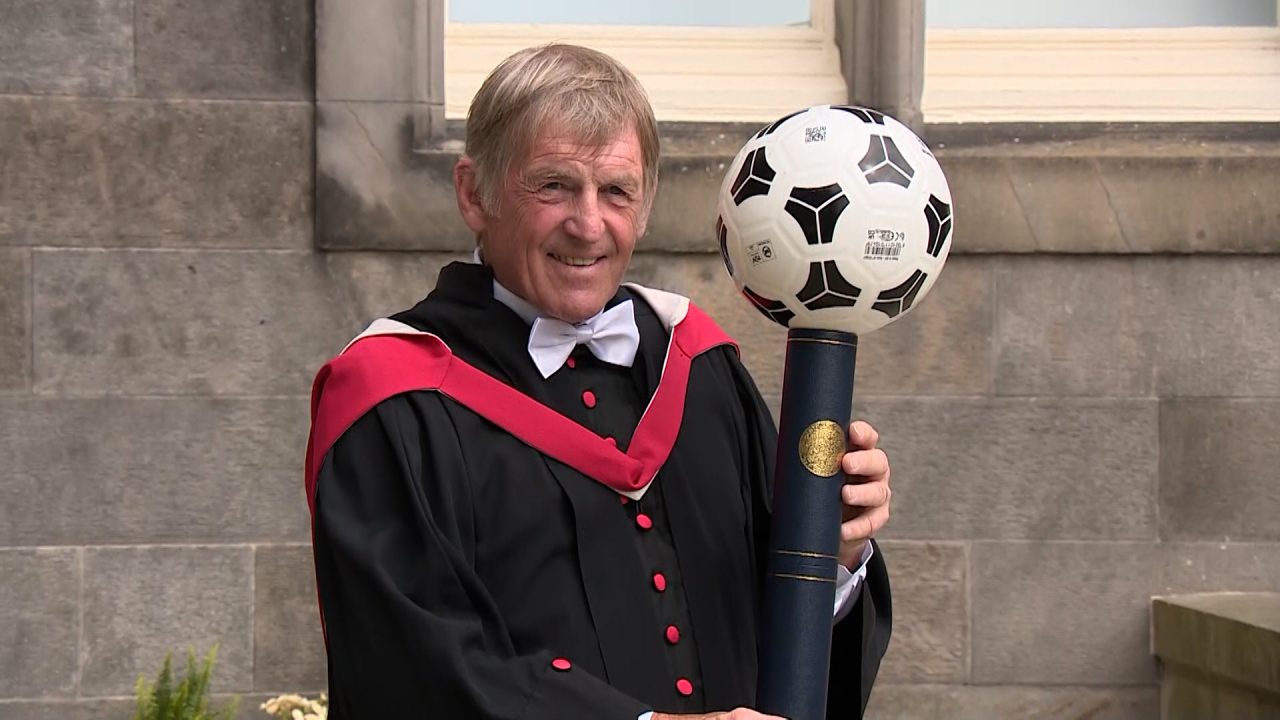 The former striker and manager was awarded an honorary Doctor of Laws degree on Tuesday for his major contributions to football, charity, and wider society, on Tuesday.

During his career, Sir Kenny made 338 appearances for Celtic and 515 for Liverpool, playing as a forward, and earned a record 102 full caps for the Scotland national team, scoring 30 goals, also a joint record.

He has been inducted into both the Scottish and English Football Halls of Fame and is very highly regarded by Liverpool fans, who still affectionately refer to him as King Kenny.

Between 2000 and 2010, Dalglish focused on charitable causes, founding The Marina Dalglish Appeal with his wife to raise money for cancer care.

Presenting the honorary degree Professor Sharon Ashbrook of the university’s School of Chemistry highlighted Dalglish’s stellar sporting achievements, and his MBE for services to football.

She continued to praise Dalglish for his remarkable contribution to charity – namely raising millions of pounds to support treatment of, and research into cancer, with two Liverpool hospitals being particular beneficiaries.

Prof Ashbrook also described Dalglish as “selfless and unwavering” in his support for the families of those affected by the Hillsborough disaster during his time as manager at Liverpool.

Speaking about receiving the honorary degree, Dalglish said: “It’s pretty humbling really. If your ambition in life was to be a professional footballer, I was fortunate that I got that.

“If they think you’ve achieved something, then that’s their decision. It’s a fantastic honour for myself and the family and it’s gratefully received.

“I really enjoyed my life in football and I was fortunate that I was at the two most successful clubs with the two greatest managers ever that I played under, and If I’ve made a contribution now and again, then fine.

“I didn’t know what a university was when I was growing up in Glasgow, my path fortunately was football and it’s something I enjoyed.

“I hope that the other students here that got their qualifications, I hope that serves them well for the future as well.”

He was honoured alongside students from the classes of 2020 and 2021 who missed in-person ceremonies due to the Covid-19 pandemic.

Around 5000 graduates from more than 80 countries, including Scotland, Ukraine, India, Germany and the USA,  have been receiving their academic awards since Monday June 13, with the three-week period of graduations coming to a close on Wednesday June 29.