Social care in meltdown: ‘I want to be treated like everyone else’

Kate Walsh lives with cerebral palsy and is relying on her mum for help after one of her carers suddenly quit. 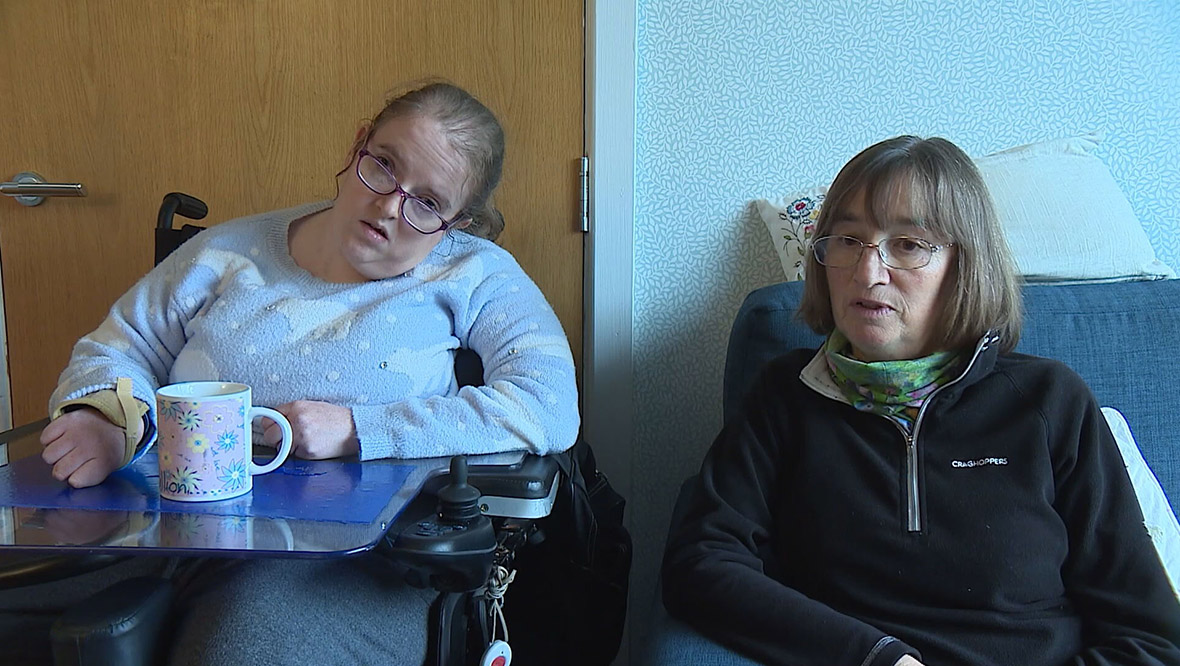 Kate Walsh doesn’t want to be looked after by her mother but has little choice after her care package was axed overnight due to a lack of staff.

The 29-year-old has cerebral palsy and wants to live a normal life.

“As a young person, I don’t want my mum helping me,” she told STV News.

“My friends, who are able-bodied, wouldn’t have their mums look after them. I want to be treated like everyone else.”

Her case has highlighted the unprecedented staffing shortage that could leave thousands of people without social care this winter.

Kate usually has three personal assistants to help her with everyday care. That was slashed three weeks ago when her main carer, who comes seven evenings a week, suddenly quit.

Strapped for staff, the care provider said they were unable to provide a replacement for Kate, so her mum Jacqueline is now plugging the gaps.

Several local authorities across the country are asking care providers to reassess and reduce support “where safe”.

The sector is “haemorrhaging” staff and a workforce exodus is expected this winter, according to Donald Macaskill, the chief executive officer of Scottish Care.

Kate’s mum Jacqueline, who works part-time, has now been forced to take on 26 hours of caring a week.

When she called Clackmannanshire and Stirling Health and Social Care Partnership to ask for help, she says she was told they were short-staffed and there was “nothing” they could do.

She said: “They said they’re having to prioritise critical and end-of-life care, which I completely understand. We keep hearing about how the crisis in care is affecting older people but there’s people like Kate needing care.”

“It’s an unwritten expectation,” she said.

“The government or someone somewhere needs to make care more of an attractive option for jobs, so they see it as valuable and viable option.”

“Staff shortages, increasing demand for support and other pressures have created an incredible strain on local services and, like many other parts of Scotland, we have had to review existing care packages to help us prioritise those with the most critical and complex care needs, people currently waiting to be discharged from local hospitals, and the most vulnerable in our communities.”

A Scottish Government spokesperson said: “We’re committed to improving the experience of the social care workforce, including improving fair work that we know is crucial to addressing longstanding recruitment issues in the sector, increasing pay and working with partners to set standards that employees can expect to be met.”