Planting in the Firth Of Forth will help protect against coastal erosion, scientists say. 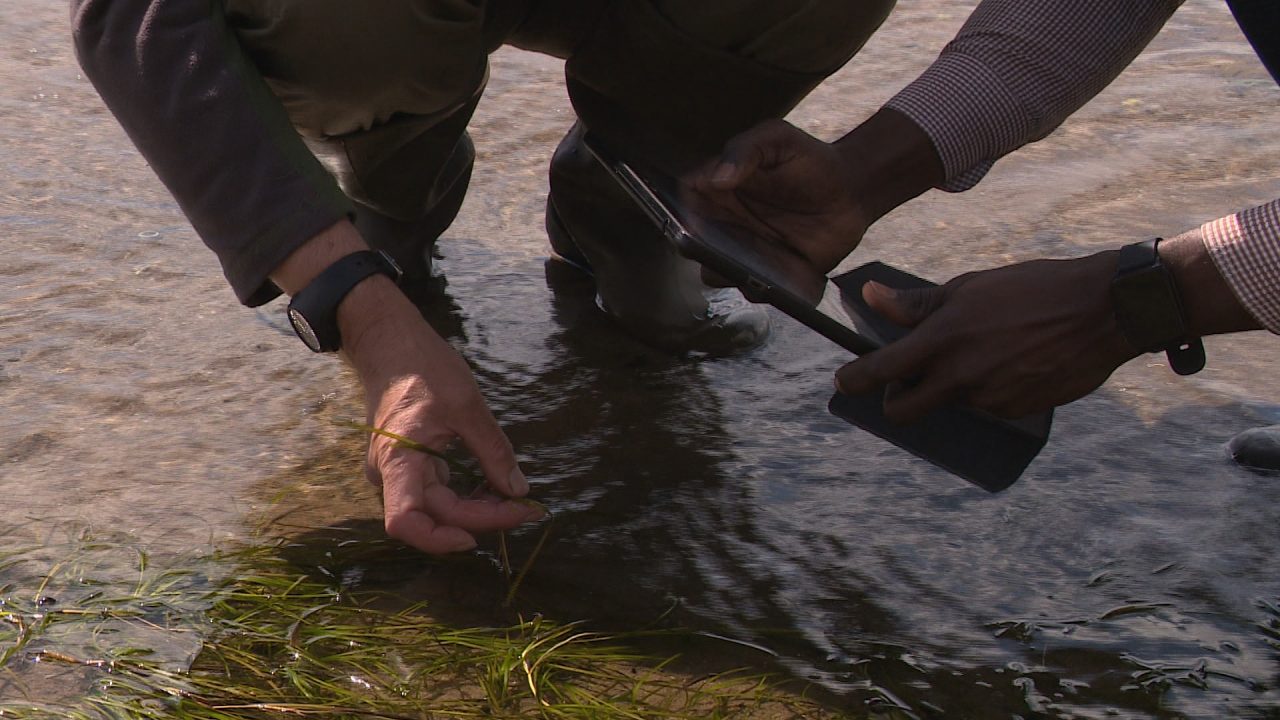 As far as superhero partnerships go, this one might seem a little unusual.

One is the only plant to flower in the sea and the other is a mollusc with one of the world’s mightiest in-built filtration systems developed over 15 million years.

Yet, according to scientists, seagrass and oysters could soon become the dynamic carbon-fighting duo we’ve needed to help battle the climate crisis.

Seagrasses by themselves are industrious plants and are the unsung heroes of marine ecosystems. They are able to absorb massive amounts of carbon dioxide from seawater while also protecting against coastal erosion.

“Seagrass has roots, which is unusual for a plant in the sea, and because it has roots, it binds the sand and mud it’s in together, so it stabilises the seabed,” said Dr Alastair Lyndon, senior lecturer in marine biology at Heriot-Watt University in Edinburgh.

“It also has plants sticking up above the seabed, so it’s a home for lots of different other animals, and there’s also a biodiversity benefit and it potentially captures carbon in the sediment, so there’s a carbon storage element there.”

Superheroes of the sea

Where seagrass also really shines is its ability to capture carbon indirectly from the atmosphere in the water around it.

The ocean stores 50 times more carbon than the atmosphere, around 38,000 gigatons.

“Seagrass is really effective at photosynthesis,” said Dr Lyndon. “It doesn’t need to have woody bits like trees and shrubs on land, it puts all its effort into making leaves which are relatively floppy and soft, which can be held up by the water.

“It means it can make those really quickly, so it can pull carbon out of water surrounding it very rapidly – even more so than something like a rainforest.”

They also provide a home to young oysters. A single oyster can filter 150 litres of water a day through its gills helping to remove contaminants, while the seagrass gets to work absorbing carbon from water and providing marine species with valuable feeding grounds.

Together they are seen as the perfect partnership and it’s hoped the two species can form a coastal defence – with oyster reefs and seagrass meadows helping to keep sediment stable and prevent coastal erosion.

“Seagrasses are kind of like the forests of the sea,” said Heriot-Watt student Matthew Abutunghe. “Its potential for storing carbon is about 20 per cent more than a tropical rainforest, so it’s a species that deserves more attention and protection as well.”

Marine biologists have already begun mapping seagrass meadows along the coast of Fife in the hope that they can develop larger-scale habitats for both the grasses and the oysters as part of The Restoration Forth Project.

A £2.4m major marine restoration programme, it involves working with communities to restore seagrass habitats and native oyster populations in the Firth of Forth. The seeds from this area will be harvested, incubated then replanted later this year to boost numbers before young oysters are introduced.

The project is working in communities right along the Forth, but Dr Lyndon says Kinghorn’s seagrass is of particular interest.

“Kinghorn is a major site in the Forth for the larger seagrass, known as Zostera marina,” he said. “It’s not a neat seagrass meadow, it’s very patchy and interspersed with some dwarf seagrass.

“The seagrass bed here has got smaller over the years, but it hasn’t disappeared completely – so it likes the area and the conditions, but we need to find out how to improve things.”

Restoration Forth will run over three years and restore around four hectares of seagrass meadows. It will also introduce 30,000 oysters to the Forth.

The project is run by WWF Scotland and Heriot-Watt is a partner organisation alongside the Fife Ecology Centre, Fife Coast and Countryside Trust, the Marine Conservation Society, the Edinburgh Shoreline Project and many others.

These simple grasses are expected to become the green stars of our coastline.

Lyndsey Dodds, oceans recovery manager at WWF Scotland, said: “Oceans have a critical role to play in helping tackle the climate and nature crises, so by protecting and restoring habitats, such as seagrass meadows, we can not only lock in carbon, but also support wildlife.

“That’s why we’re excited to be part of Restoration Forth, working with partners and local communities to bring back vital habitats including seagrass habitats and native oysters to the iconic Firth of Forth, enhancing the local environment and tackling climate change.

“We’re hopeful this will inspire more community-led restoration projects across the whole of Scotland.”