Firefighters remained at the scene on Tuesday morning, almost 24 hours after the blaze was first reported. 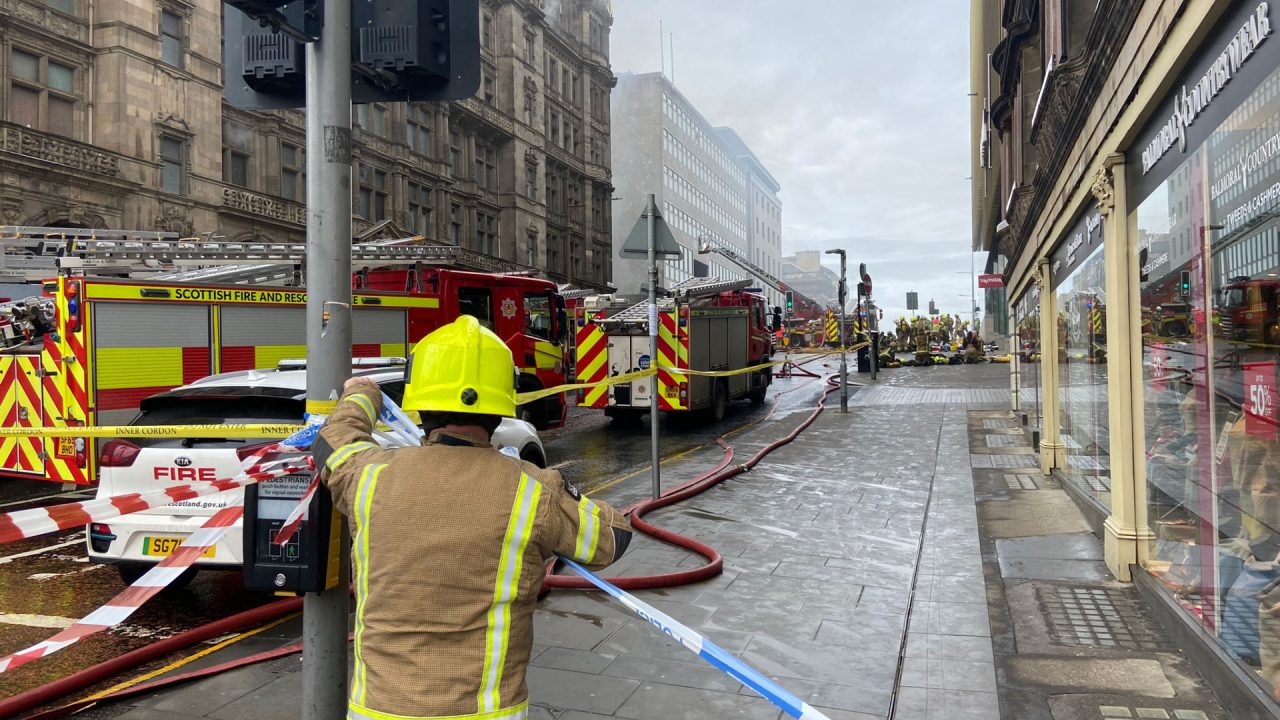 Investigations into a fire which ripped through a former department store in Edinburgh leaving five emergency responders in hospital are under way.

Around 50 personnel tackled the blaze in the category A-listed Jenners building in the city centre at one stage, after the alarm was raised around 11.30am on Monday.

Five emergency responders were rushed to hospital as a result of the operation, with one fighting for his life in a critical condition after sustaining injuries in the blaze.

The four other firefighters have since been discharged from hospital.

On Tuesday morning, firefighters remained at the scene of the incident.

Ross Haggart, the Scottish Fire and Rescue Service’s interim chief officer said: “The fire at the Jenners building in Edinburgh is a very serious and complex incident and regrettably I can confirm that five of our colleagues were taken to hospital for treatment. Four have now been discharged however one remains in a critical condition.

“The families of all those affected have been made aware.

“We currently remain at the scene with one appliance to monitor the building for any remaining hotspots.”

Fire Brigades Union general secretary Matt Wrack said: “This is an extremely serious incident. Our thoughts are with this seriously injured firefighter, their family, friends and colleagues.

“We are immediately putting in place the necessary support and will begin the process of investigating what has happened.

“The Fire Brigades Union will provide whatever assistance is required in the days ahead.”

The iconic building – which housed Jenners for over a century before its closure in May 2020 – is undergoing a multi-million pound renovation backed by Danish billionaire Anders Holch Povlsen to turn it into a new hotel and leisure facility.

Plans approved by City of Edinburgh council in June last year will see part of the former department store turned into a 96-bedroom boutique hotel, alongside a bar and restaurant, above overhauled shopping areas.

City of Edinburgh Council leader Cammy Day said his thoughts were with the firefighters who worked tirelessly to get the fire under control.

He said: “My thoughts are with the fire officers injured in the fire and their families. We will continue to work closely with the fire services and partners as investigations are carried out.”

A Police Scotland spokesperson said: “Around 11.35 am on Monday, January 23, police attended to assist Scottish Fire and Rescue Service following a fire at an unused building on South St David Street at Rose Street and Princes Street, Edinburgh.

“The fire is now under control. There is no wider risk to the public and emergency services remain at the scene.

“Five firefighters have been taken to the Royal Infirmary of Edinburgh for treatment.

“There have been no further reports of injury at this time.

“Three commercial properties nearby were evacuated as a precaution.

“A number of roads in the area have been closed as a result, including one lane eastbound on Princes Street and the east end of George Street.

“Enquiries into the cause of the fire are continuing.”

Owners of the site AAA United said that they are “devastated” about the fire.

Anders Krogh director of AAA United said: “Of course, we were devastated to find out about the fire in the Jenners building shortly after it broke out. Our thoughts and appreciation are with the rescue team.

“Thanks in no small part to great work by workers on site and resolute action from the local fire department.

“The first investigations show very localised damage, only in the lower north side of the building.

The overall building is intact, but we still await further investigations over the following days will reveal the total extent of the damage.

“Of course, this is a temporary setback for the refurbishment of the Jenners building. Our plan for building, is first and foremost to help preserve a unique historic building in Edinburgh.

“Hopefully, we will soon be able to reengage on our ambition to bring the Jenners building back to its original glory. But right now our thoughts are only for the wellbeing of everyone involved.”