Paddleboarders take to water in flooded park after downpours

Much of Haugh Park in Cupar, Fife has been flooded after the nearby River Eden burst its banks following heavy rain. 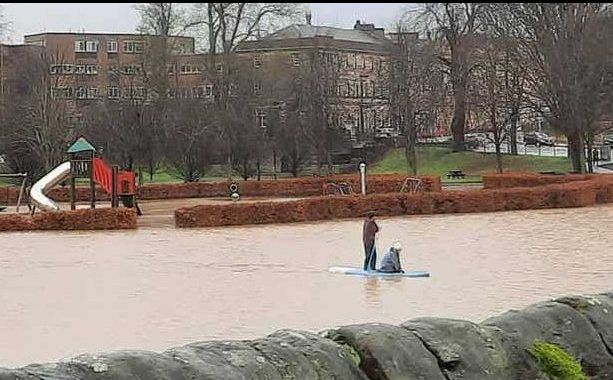 Paddleboarders have been spotted taking to the water in a park after flooding turned it into a lake.

Much of Haugh Park in Cupar, Fife has been flooded after the nearby River Eden burst its banks following heavy downpours.

James Matheson tweeted a picture of a paddleboarder gliding across the water on Saturday.

Local resident Kim Bennett said some houses in the area have been flooded and there are fears other properties might be affected if the rain continues.

Mr Matheson, 34, told the PA news agency: “The River Eden in Cupar burst its banks sometime in the last couple of days after the recent heavy rainfall. It means the Haugh Park in the centre of town is almost completely flooded, and has now been closed off by the police and council.

“Further along the riverside path behind Edenbank Road is also badly flooded meaning residents there are starting to get worried that if the rainfall continues it might start reaching the houses.

“I was checking in on my 90-year-old grandmother who lives there alone, and one neighbour said to me it was the highest they had seen the river there in the past 20 years when they moved in.”

A Met Office yellow warning of snow and ice is in force across northern and eastern Scotland, including Fife, until midnight on Sunday.

Meanwhile the Scottish Environment Protection Agency (Sepa) has issued four flood alerts, including one for Fife, and one flood warning.

The Fife warning states: “Following recent heavy rain, there could be some ongoing flooding impacts on Saturday from surface water and some rivers in this area.

⚠️Further showers over Eastern Scotland, with snow on higher ground.
⚠️Flooding of small watercourses and low-lying roads is possible.
⚠️Alerts and warnings have been issued. Please take care when making essential journeys.
⚠️Stay up to date at https://t.co/SWf758Tzb5 pic.twitter.com/YMRrTLuqO7

“Impacts may include flooding of low-lying land and roads.”

Kim Bennett, from Cupar, a librarian at the University of St Andrews, spotted another paddleboarder and also took to social media to share images of the flooding.

She said: “The river Eden has bursts its banks. Worst I, and others, have seen it in 20 years.

“Some houses sadly flooded, under the South Bridge. The Haugh Park had been turned into a lake – spotted a paddle boarder today making the most of it.

“Culverts in the park have been pushed up because of the force of the water  and I heard this evening that the police have now cordoned the park off.”

Fife Council said that it is monitoring high risk areas.

Police said they attended at the park and alerted the council.