Villagers in Airth were perplexed by the brief interruptions to their power supply, which affected around 50 homes often at dusk. 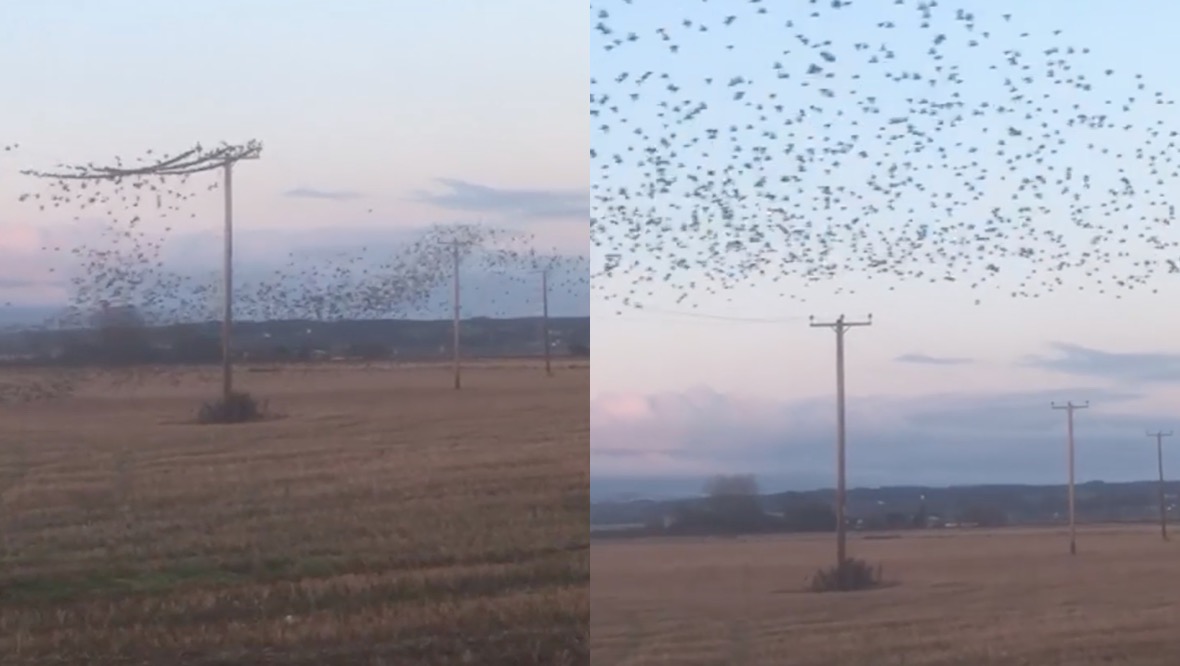 An engineer investigating mystery power cuts in a Scots village discovered they were caused by a spectacular murmuration of starlings.

Villagers in Airth, near Falkirk, were perplexed by the brief interruptions to their power supply, which affected around 50 homes and often at dusk.

However, engineer Neil McDonald finally solved the mystery when he investigated the site on his way home one night and spotted thousands of birds “dancing” on overhead power cables, causing them to bounce and the power to trip.

Mr McDonald captured the spectacle – known as a starling murmuration – on camera.

He said: “It was a mass aerial stunt by these amazing birds and in all my 14 years working for SPEN, I have never seen anything like it.

“For all the birds looked small, the sheer number of them caused the wires to bounce up and down as they danced on and off – there’s actually three wires between those poles and when they clash together, the power will go off for around ten seconds or so at a time.

“That’s what’s been happening quite frequently, with some of these clashes causing wider damage and longer outages.

“We’re looking at ways to discourage them from impacting our power lines and will work with the RSPB for the best advice.

“We’ve successfully managed to move on roosting geese in the past so hopefully our starling community can be encouraged to safely relocate somewhere that doesn’t impact our power supplies, and local communities, quite so much.”

It is thought starlings behave in this way for several reasons.

Grouping together offers safety in numbers. Predators such as peregrine falcons find it hard to target one bird in the middle of a hypnotising flock of thousands and starlings are thought to be most vulnerable at twilight.

They also gather to keep warm at night, hunker down together and to exchange information, such as good feeding areas. They gather over their roosting site and perform their wheeling stunts before they roost for the night.

Methods to move starlings on normally involve playing loud artificial noise to put them off roosting in a specific location, including sounds of predators like sparrowhawks.

Toby Wilson, RSPB Scotland’s senior conservation officer for central Scotland, said: “Starling murmurations are one of the great spectacles of the natural world and can be enjoyed across the UK during the autumn and winter months.

“I have heard of one or two instances of them causing local issues with power lines but this is the first I am aware of in this area.

“Unfortunately, starling murmurations are becoming a rarer sight, as starling numbers have suffered serious declines over the past few decades due to loss of habit and changing farming techniques affecting food supplies.

“We have a good relationship with SP Energy Networks and have worked together before, although never on a fantastic spectacle such as this.

“Obviously, we recognise the need to maintain energy networks and hope the birds can be sensitively encouraged to relocate to a suitable, nearby site. We are happy to work with SP Energy Networks to advise on this.”