First Minister Nicola Sturgeon had the honour of pushing the button to ignite 700kg of explosives. 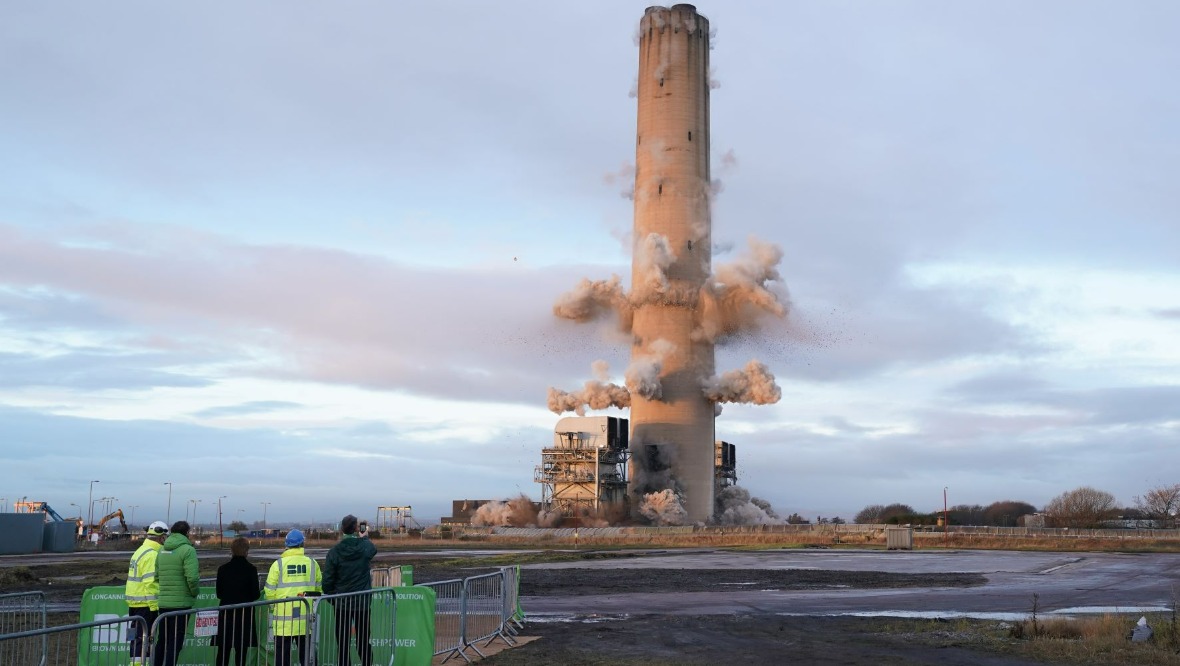 The 600ft chimney at the former Longannet power station has been demolished in a controlled explosion.

First Minister Nicola Sturgeon had the honour of pushing the button to ignite 700kg of explosives, bringing down the chimney stack which has dominated the Firth of Forth skyline for more than 50 years.

Scotland has been coal-free since ScottishPower closed the Fife station in 2016.

The energy company now only generates 100% green electricity through its wind and solar farms.

The firm said the demolition of the chimney – which was the country’s tallest freestanding structure – marks a milestone moment in the UK’s journey to net-zero emissions.

The First Minister said: “Today’s event is a symbolic reminder that we have ended coal-fired power generation in Scotland, as we work in a fair and just way towards becoming a net-zero nation by 2045.

“Our goal is to generate 50% of overall energy consumption from renewable sources by 2030, and Scotland’s energy sector is well placed to deliver on the key investments in renewables, hydrogen and energy storage required to achieve this.

“Growth in these sectors over the next decade will be transformative for Scotland, delivering further good, green jobs, strengthened energy security, and benefits for local communities as we decarbonise industry and society to mitigate the worst effects of climate change, in a way that leaves no one behind.”

Prior to the demolition and following on from COP26’s Glasgow Climate Pact, ScottishPower projected global warming stripes onto the chimney along with the slogan Make Coal History in a call to action for other countries to follow Scotland’s lead.

Created by Professor Ed Hawkins of the University of Reading, the stripes show the change in global temperature from 1850 to 2020, with shades of blue showing cooler-than-average years and red showing years that were hotter-than-average.

The demolition was carried out by contractor Brown & Mason, and work to remove materials at the site will continue into 2022.

Keith Anderson, chief executive of ScottishPower, said: “At COP26 in Glasgow, we were proud to show the world that Scotland has already made coal history. As a 100% energy company, we are committed to helping the UK end its reliance on fossil fuels.

“For half a century, Longannet’s chimney has dominated the Firth of Forth skyline.

“We bade farewell to that landmark today – however this is a landmark day for Scotland too. Watching the chimney of Scotland’s last coal-fired station fall today represents a real milestone, as the UK moves away from the large polluting power stations of the past and accelerates down the road to net-zero emissions.

“We already know the transition from fossil fuels to renewable energy is essential to minimise the worst impacts of global warming and address the climate emergency.”

Lang Banks, director of WWF Scotland, said it was a “historic moment”.

He added: “We have successfully made coal power history in Scotland and rapid progress is now being made globally towards cleaner, renewable energy.

“But this is also a reminder of the need to ensure that communities and fairness are at the heart of our transition to [a] zero carbon world and the essential need for investment in skills and training for the industries of the future.

“It’s good that Scotland’s Just Transition Commission will be developing long-term sectoral plans, which are vital to give certainty, create jobs, cut carbon and bring social benefits for all.”