Humpback whale captured coming up for air in Firth of Forth

Dan Casey from Fife captured the amazing moment from the skies using his drone. 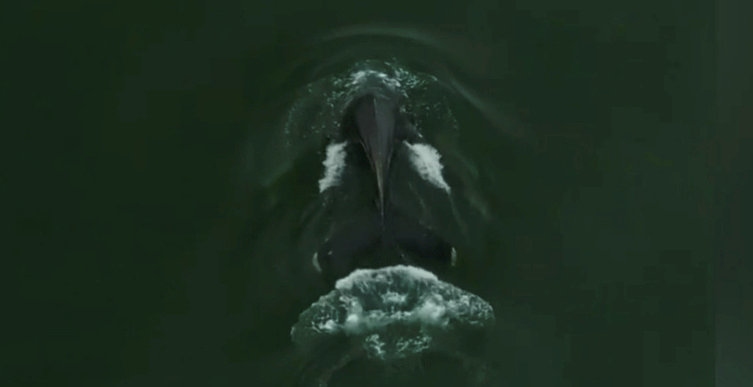 A humpback whale has been captured coming up for air in the Firth of Forth.

The whale was filmed from a boat which left Granton Harbour, Edinburgh, on Sunday, December 12.

It came up for air a number of times and scared members of the crew when it ‘popped up’ just 30ft from the boat by surprise.

Dan Casey, 30, from Lundin Links, Fife, has been trying to film the whale for three years.

He said he hoped his quest to find the whale had a ‘happier ending’ than Herman Melville’s 1851 novel Moby Dick, which ends with the obsessive Captain Ahab being dragged into the ocean.

Dan, a freelance TV producer, had previously tried to film the whale by flying his drone over the river while he stood on the banks but was unsuccessful.

He tracked it with the help of online enthusiasts, and the excursion lasted around four hours with the whale visible for most of that time because of ‘perfect’ conditions.

Whale watchers are attempting to determine whether it is the same one that has been spotted in the Forth in previous years.

Dan said: “I’ve been going along the coast the last three years trying to get this whale, following all the sightings that are uploaded online. I was never able to get it.

“Thankfully I messaged one of the groups on Facebook because I saw that they had been out on a boat before and got good pictures – so I asked if I could come along with the drone.

“We had the perfect weather for it. It was the calmest I had ever seen the Forth.

“Everything fell into place with the weather, I was very chuffed especially after trying for so long.

“It’s like my own personal Moby Dick – in the Forth. Hopefully it has a happier ending.

“As soon as we set out from Granton Harbour, heading across to Kinghorn, we could see him. He would bob up two or three times and then do a big dive – you know he’s diving because the tail goes up.

“Then he can reappear anywhere. There was one point where he came up 30ft from the boat and we had no idea he was so close.

“First we knew was the sound of the blowhole and we all jumped about a foot in the air. It was a really loud and bassy noise.

“He was there the whole time we were out there – three or four hours. You can go out for hours and see absolutely nothing – that was four hours of pure whale.

“You can see the whole length of his body and how he dives under the water with the drone.

“It gives you an impression of the size of him. Someone suggested online he was up to 40ft long.”

“Last year they identified a whale that was the same as one spotted on the west coast six months prior.