Nicole Short told an inquiry she felt 'fearful' when she arrived at the scene in Kirkcaldy during 2015. 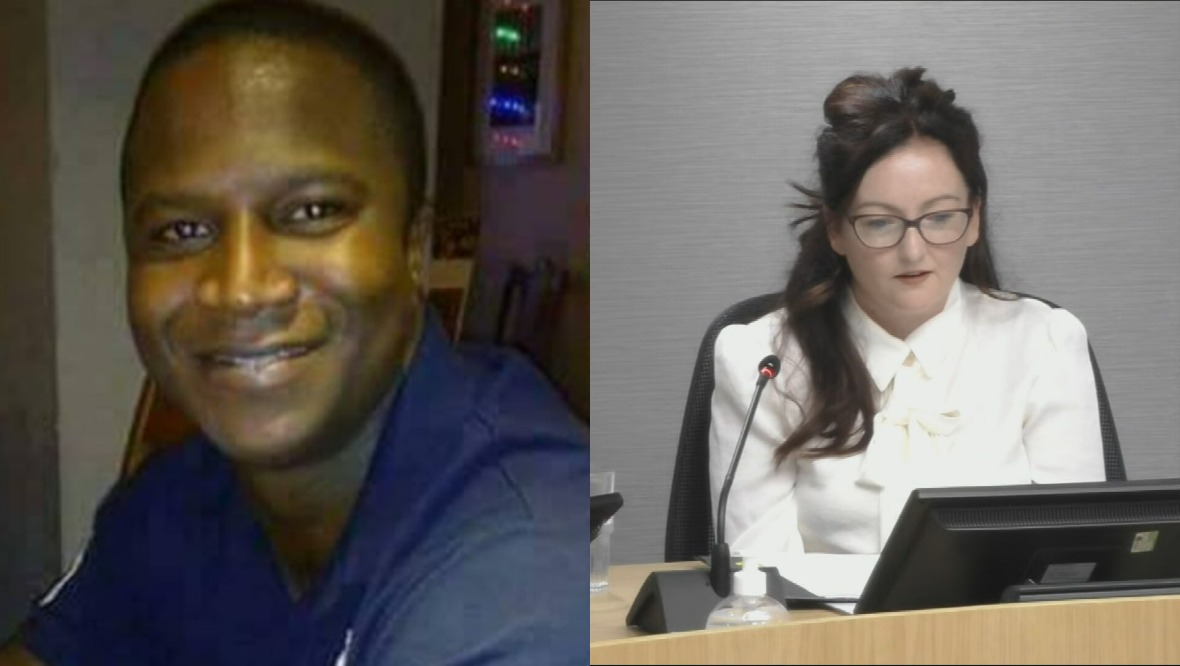 A former police officer ran from Sheku Bayoh after being “overwhelmed by terror” before falling to the ground after receiving a blow to the head, the inquiry into his death has heard.

Nicole Short said she felt “fearful” and “scared” when she arrived at the scene in Kirkcaldy, Fife on May 3, 2015.

An inquiry into the circumstances of Mr Bayoh’s death, and whether race was a factor, is taking place in Edinburgh.

Ms Short, who the inquiry heard is 5ft 1in tall, was one of the officers responding to 999 calls that Mr Bayoh, 31, carrying a knife in the town’s Hayfield Road just after 7am.

She cried briefly after sitting down at the inquiry before giving her evidence.

The inquiry’s senior counsel, Angela Grahame QC, read out part of a statement from Ms Short.

The inquiry heard that while on their way to the incident in Kirkcaldy in a police van, Ms Short said she told her colleague “I hate going to calls like this”.

She told the inquiry: “I just felt because of my build, essentially, if I was to get stabbed it would probably increase chances of it being fatal.”

Describing how she arrived at the scene on Hayfield Road, she said: “I was fearful, I was scared, I felt like my priority was to deal with what was in front of me.”

Last week, the inquiry heard evidence that two officers who arrived at the scene first tried to spray Mr Bayoh, but it had no effect.

Ms Short said she saw Mr Bayoh walking away from two other officers after they had used spray, wiping it away from his face like it was “water”.

She said Mr Bayoh was unresponsive, saying it was like he was “on a mission”.

She added: “His muscles were massive, they were bulging out of his top.”

Ms Short, 36, said she drew her baton and ordered Mr Bayoh to get on the ground and he then shouted “f***ing come on then” and began “boxing skipping” towards her.

She said Mr Bayoh then moved towards her, as she shuffled backwards.

When he became close to her, she said she instinctively ran away.

She said: “Being, like, completely overwhelmed with terror is the best way I could describe it.”

She said she felt an “almighty blow” to the back of her head and fell to the ground, moving into a fetal position after falling on her front initially.

Another officer picked her up by her stab vest and told her to go back to the van, she said.

She told the inquiry she saw Mr Bayoh “lifting” three officers off the ground as they struggled with him.

On Tuesday morning, supporters of Sheku Bayoh’s family took the knee outside the inquiry.

The group gathered outside Capital House in Edinburgh where the inquiry is taking place, as members of the 31-year-old’s family arrived to watch the proceedings.

Mr Bayoh’s mother, Aminata Bayoh, and his sister, Kadi Johnson, arrived on Tuesday morning to chants of “Black Lives Matter” and “No justice, no peace, no racist police” from about 50 protesters.

Present with the family was their lawyer, Aamer Anwar.

Speaking about Mr Bayoh’s family, Mr Anwar said: “They have been fighting for justice for some seven years now and this struggle is not over.”

The lawyer told supporters: “When Sheku died in police custody seven years ago, he was a 31-year-old man, he was unarmed which we know is factually correct.

“He was walking down the street, police had been called to an incident after they received reports that a black man had been acting erratically and carrying a knife.

“When the police arrived, Sheku was unarmed.

“His family at the time, didn’t ask for anything special. They asked for justice. Justice should be a right and not a privilege.

“The family spoke some two weeks after Sheku died. They refused to speculate and they always said if Sheku broke the law then the police had a right to act, but any force used had to be reasonable, legitimate and proportionate.

“His family then began a campaign for justice. And some four years later, they were denied that justice by the Lord Advocate and they were told there would be no charges brought. Five years later that was confirmed when the Government announced the inquiry.

“The family are asking for this inquiry to be robust, to be impartial and to deliver the truth to this family because they know without truth, they will never get justice.

“Our justice system in this country likes to talk about being colour blind. As far as Sheku Bayoh’s family is concerned, the colour of his skin, his blackness was used as a weapon. It was seen as a weapon. We are in now for the long haul. This inquiry is expected to last two to three years. Today is a critical day.

“They have been fighting for justice for some seven years now and this struggle is not over.”

Mrs Bayoh thanked the protesters for coming to show solidarity with the family ahead of the evidence being heard.

Earlier, the inquiry had been told Ms Short has been rendered “permanently disabled” from injuries she sustained on the day of Mr Bayoh’s death.

Roddy Dunlop QC, who is representing Ms Short and another officer, said: “It would be naive to think that the events of that day have not had material impact on the lives of the families of the officers who attended the scene that day.”

Mr Dunlop said there have been accusations of racism directed against those officers and “such vilification has a lasting impact”.

The inquiry, which is examining the immediate circumstances leading to the death of Mr Bayoh, how the police dealt with the aftermath, the following investigation, and whether race was a factor, continues.