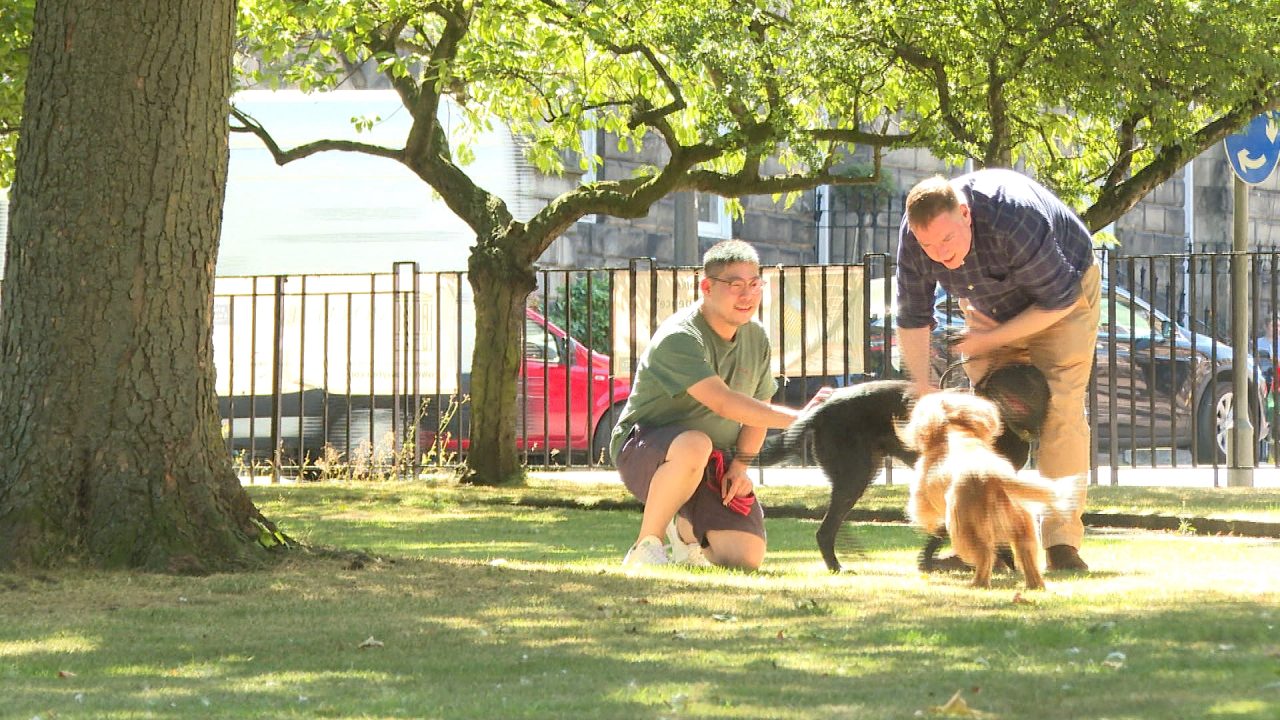 There are now around 10 million pet dogs in the UK, but with our furry friends comes a major environmental menace – plastic poop bags.

Each one can take 500 years to degrade at landfill, which is why an Edinburgh duo of dog owners, George Greer and Ka ho Wong, decided to come up with their own more eco-friendly type of bag – which dissolves in water.

“We were on the shores of Loch Long for a walk and we came across this wasteland of plastic that had been washed ashore,” said George.

“It was really quite shocking and hit home for us just how much plastic waste is in our waters and our lochs. We really thought there must be an alternative to this plastic which is with us forever and future generations.”

They started looking at items we already use, such as medical pills which are coated in a film that dissolve in our stomachs, and the dissolvable films on washing pods that we pop into our washing machines.

From there, they set about developing their own ‘water-reactive’ bags.

Out of their concept has come Project Harmless, a water-reactive, non-toxic and microplastics free material that they’ve used to make dog waste bags – tackling one of the biggest problems our environment faces.

While most of us are aware of the dangers of single-use plastics on our eco-systems, there are still complications when it comes to some of the options we think of as being greener.

With dog poop bags for example, compostable and biodegradable might sound good in principal, but might not be as good in practice if they’re not disposed of under the right conditions.

Compostable bags need to be in a unique microbial environment to break down. A high temperature is critical but, if managed right, the bags will rot within three months.

These perfect conditions cannot always be found at all landfill sites, though, and certainly not in our parks and rivers where we often see dog waste bags left abandoned.

What Project Harmless offers, though, is a bag that can go in any dog waste bin and be taken to landfill where it will completely disintegrate and biodegrade in just a few days – or equally disintegrate in cold water, such as a river for example, in a few days more if it does end up as litter and is not disposed of correctly.

The bags were developed during lockdown last year, released four months ago and now join the ranks of other innovations, including soluble flushable bags made from Polyvinyl Alcohol and another creative innovator, Brian Harper, who in the last few years managed to come up with a dog poop-powered street lamp in Worcestershire.

George and Ka ho are now in talks with the local Edinburgh Dog and Cat Home to introduce their bags there and hope to sell internationally in the near future.

“For the price of a coffee a week, you can do the planet a favour and mitigate against the harmful plastics that are going out into the world,” said George.