Bin collections are to restart in Edinburgh on Tuesday morning - but some residents may not have their backlog cleared in time. 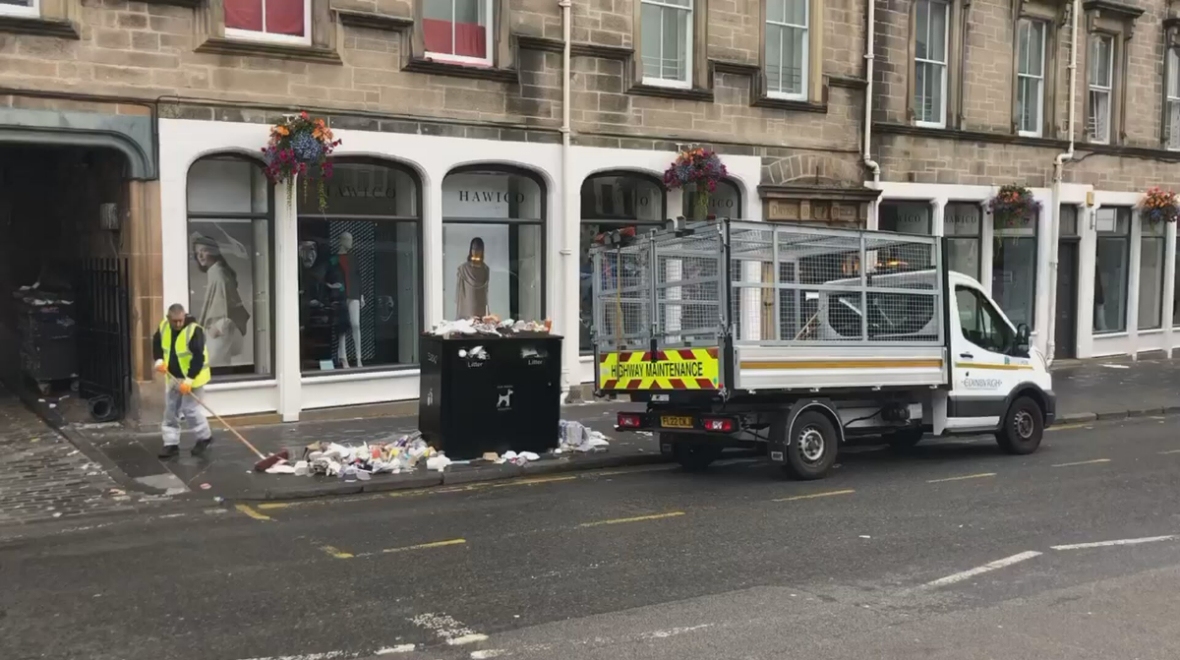 Bin collections are to resume in Edinburgh after 11 days of strikes, however residents have been warned waste may not be collected before further industrial action starts.

The capital’s local authority said the “full backlog” of uncollected refuse will take time to clear, though that is unlikely to happen before the next scheduled round of strikes get under way on September 6.

Unions have recommended their members reject a revised pay offer from the Convention of Scottish Local Authorities (COSLA) on Monday after more than a week of walkouts which has left rubbish piling up on city streets across the country.

Images of overflowing public bins with mounds of bagged waste cluttering pavements have been widely shared online amid the action over a “paltry” pay offer.

Workers have demanded a flat rate increase similar to that introduced for public sector staff in England.

City of Edinburgh Council said blue glass box collections will continue to be suspended for the time being in order to “prioritise resources,” but household waste and recycling centres will reopen from Tuesday morning with extended hours.

The strike is officially due to end at 4.59am, with residents who receive kerbside collections asked to put their bins out as scheduled on their regular day.

The council said “additional resources” had been deployed to support street cleansing and communal waste collections. Much of the attention is to be focused on high-foot traffic areas including the city centre.

Council leader Cammy Day said residents would have to be “patient” while collections get back to a normal timetable.

He added: “This dispute has brought the value of our waste and cleansing teams – and their right to fair wage – into sharp focus and I’m delighted they’ll be back out from Tuesday, helping to return our city to its best.

“While they’ll be working hard to catch up on collections and making every effort to collect litter across the city, it’ll take time for things to return to normal. Please bear with them as they do so and, if you can store your extra waste safely for a little longer or are able to book an appointment at a recycling centre, please do so.

“If your bin is not collected on its normal day, please leave it out and it’ll be picked up as soon as possible thereafter.

“I appreciate that this has been an extremely challenging period for us all and I would like to thank our residents, businesses and visitors for their continued patience and understanding.”

The first wave of waste strikes in a number of other council areas have either already ended or are scheduled to end later this week.

However, schools in some locations – including Aberdeenshire and Glasgow – are set to close their doors to pupils early in September in a new wave of action.

Council bosses tabled a new offer following discussions on Sunday. It included a minimum pay uplift of £1,925, based on a 37-hour working week, matching the offer made to local government in England.

But union chiefs said the uplift was “simply not big enough” to amount to a reasonable pay offer for staff.

Unison’s head of local government, Johanna Baxter, added: “Strike action will continue while we consult our members on this latest offer.

“Council workers are struggling to cope with the cost-of-living crisis after ten years of austerity.

“This is another pay cut they simply cannot afford, which is why we are recommending they reject the offer and continue with the action already planned to try to secure a bigger consolidated sum.”

Deputy First Minister John Swinney said the Scottish Government would provide a further £100m to local government for 2022-23 to support the cost of living payments being offered as part of the pay award on top of £140m already allocated.

He added the latest offer would see all local government workers receive at least £1,925.

“Intensive discussions between the trades unions and COSLA over recent days has led to a revised pay offer being made,” he said.

“No deal is perfect and I wish we could go further but this deal does offer significant increases for those on low pay. We must now respect the democratic trade union processes underway while we hope that members decide to accept the offer.”

Unison have put the latest pay offer to their members in a ballot, but have recommended the terms be rejected.

They said the offer remains a minimum of 5% on average across the local government pay grades with a varying one-off payment – around £989 for the lowest paid.

It said it further estimates that the offer in total represents for around 85% of the workforce between £1,925 and £2,000.

Unite industrial officer Wendy Dunsmore added: “The structure of the offer continues to disproportionately and unfairly effect the lowest paid with the majority of those being women. In real terms it leaves the lowest paid workers no better-off and a significant proportion of the offer does not enhance overtime, allowances or pensions.

“The offer remains unacceptable and it represents a waste of precious time.

“We understand the gravity of the situation across the country but equally our members are facing the worst cost of living crisis in a generation. Unite’s strike action remains scheduled for next week unless COSLA gets back to us with a credible offer which addresses our primary concerns.”