Andy Neil volunteers at the Cyrenians charity in Leith and said it's a struggle to heat his home. 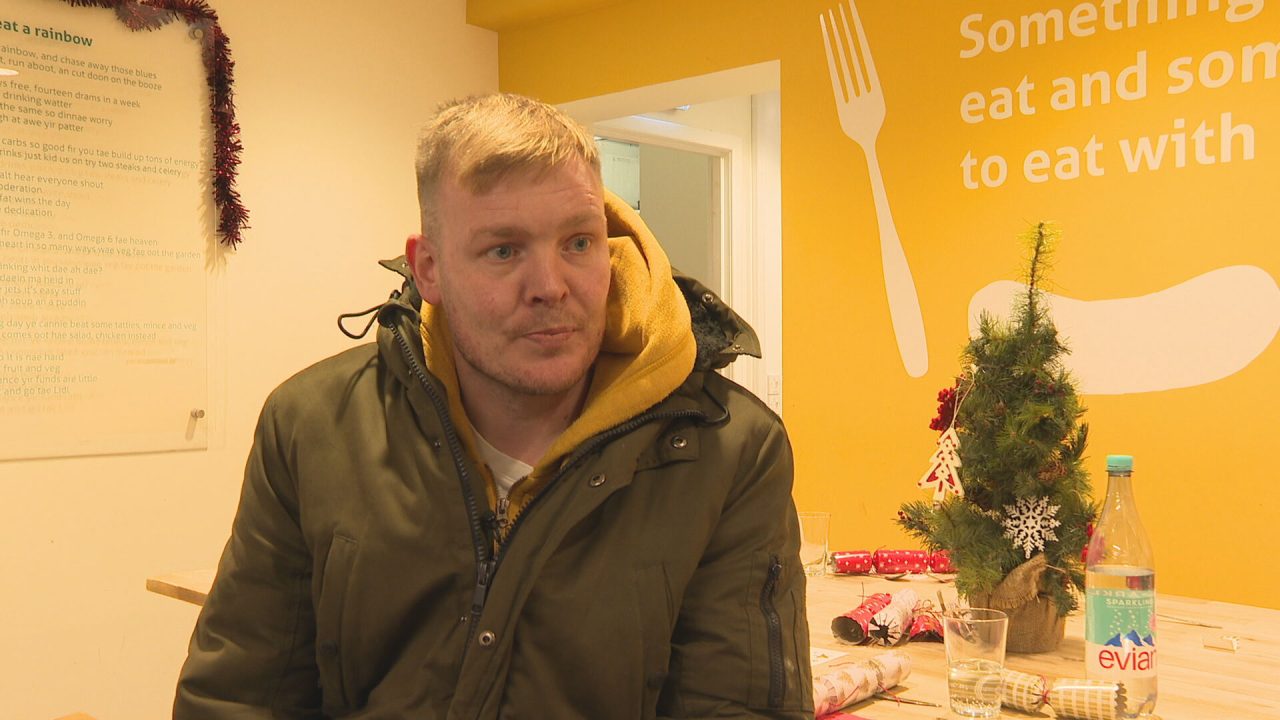 A dad who overcame drug and alcohol abuse said he cannot afford to heat his council home as the cost of living crisis deepens this winter.

Andy Neil was living on the streets of Edinburgh before he went into treatment three years ago.

Now, he volunteers with homelessness charity Cyrenians at its community hub and helps other people with their recovery.

But he admits it’s a struggle not to relapse himself as he scrambles to make ends meet for his family.

He told STV News: “I was an alcoholic and a drug addict, and it was survival enough out on the streets.

“I’m still here but it’s a struggle, man. Electricity bills are easy to phone you up 20 times a day, that you’re due them money. You offer them £40 and they say ‘no we want £250 off you’ – where am I gonna pull that from?

“If I didn’t have that experience of three years in recovery, I’d be straight back on the drink, it blocks it all out. I’m trying to deal with those problems now. If I didn’t have a programme, I don’t know where I’d be.”

He added: “The people in our community get each other. You’ve got to help people now.

“It doesn’t matter if you’re having a bad day. I’ve got two sponsees I’ve got to try and keep sober.”

James also helps out with cooking classes at Cyrenians.

He said: “When the basics are that much more expensive, it just makes life that much more difficult. I’m very fortunate to have a family and friends who are able to offer me a level of help, because I work part time due to health conditions.

“Fortunately I’ve now come away from benefits in the last year or two, but I had a year or so on benefits a couple of years back which I personally found very difficult in terms of applying for Universal Credit and actually gaining access to the system and then waiting a long time to receive any money, then that money’s not necessarily enough.”

Cyrenians warned Scots are at risk of becoming homeless this winter as thousands struggle to afford soaring bills during the cost of living crisis.

The charity said the lifting of the eviction ban and rent freeze coupled with withdrawal of support for energy bills next April could drive people into debt.

It comes as John Swinney announced a raft of changes in last week’s Scottish Budget – including a 10.1% increase in social security benefits in line with inflation, a £1bn boost in health and social care and £20m previously ringfenced for an independence referendum instead being used to help those struggling to afford bills.

The charity’s chief is calling on the Scottish Government for an urgent reform for Scotland’s social security system, better provision of social housing and investment in homelessness services.

Ewan Aitken, Chief Executive of Cyrenians, said: “This winter is tougher than ever for people who simply cannot meet the cost of living. Thousands of people are getting in to debt that will threaten their ability to keep a roof over their head. The cost-of-living crisis must not be allowed to become a homelessness crisis.

“Investment now, improves wellbeing, saving money and lives in the long-term. The Scottish Government has significant new powers for both taxation and welfare in recent years.

“Too often people’s experience of accessing social security is characterised by delays, sanctions and difficulties getting through to anyone who can help when there are issues. People find themselves turning to emergency support, often with loans becoming the only viable solution; which simply delays and increases the issue of poverty further down the line.

“The current crisis is not going to melt away with the snow. We need to look beyond an immediate crisis response and work towards long term systems change to ensure that everyone can afford to live and thrive, not just survive.”