An investigation will be carried out into the incident. 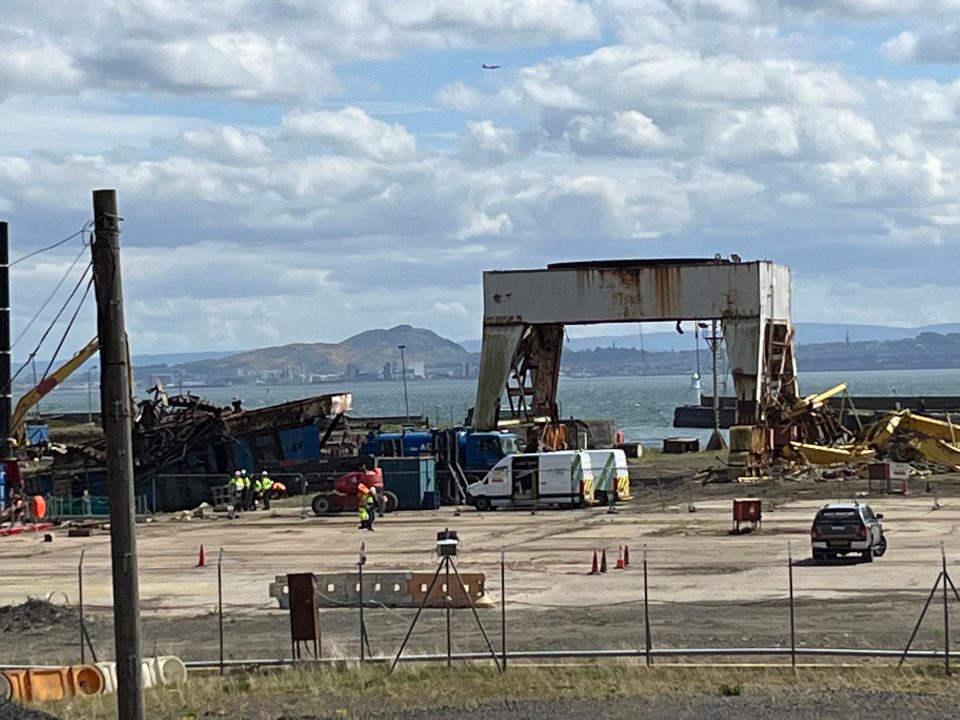 An investigation is to be carried out after part of a crane fell into a dock yard in Fife whilst being demolished.

The topside element of the redundant crane – a legacy of the BiFab yard at Burntisland – crashed into the water in the West Dock of the port on Thursday morning.

No-one was injured as a result of the incident, the owner of the port has since confirmed.

One resident said it was a “sad end for an iconic piece of equipment from Burntisland’s industrial heyday”.

“The crane was made by Butters Bros & Co Ltd in Glasgow and dated back to the 50s – when there was still a shipyard in the town,” Sarah Price told STV News.

“More recently, before it shut down for good, the yard had been used by Bifab for oil and energy related fabrication contracts. The old crane was not used any more, but its great bulk was still a familiar feature on the town’s skyline, like a great rusting redundant bird.”

The specialist demolition contractor, Dem-Master Demolition Ltd, was in “full control” of the site and the operator at the time, owner Forth Ports added.

A spokesperson for Forth Ports described it as a “concerning incident”.

“We can confirm that the topside element of a redundant crane, that was in the process of being demolished by a specialist contractor at the Port of Burntisland in Fife, has fallen into the West Dock at the port,” they said.

“This is clearly a concerning incident and it is important to confirm that there are no reports of any injuries.

“A team from Forth Ports and the demolition contractor is on site and is currently assessing the best way to recover the structure from the dock.

“The West Dock of the port remains closed at this time.”

The spokesperson later provided an update to confirm that a “small amount” of gearbox oil had spilled into the water.

But, they indicated that there is “no risk” of any oil entering the Forth Estuary.

They said: “Importantly, we can now confirm that no-one was injured in the incident at the Port of Burntisland which occurred at 09.30 this morning on the site which was under the control of the specialist demolition contractor.

“A small amount of gearbox oil has spilled into the water. However, because the West Dock at Burntisland is an enclosed dock, there is no risk of any oil entering the Forth Estuary.

“Our specialist oil recovery contractor is on site and will contain and recover the oil.”