The Extinction Rebellion protesters parked a purple boat at the Bo'ness Road gate in Grangemouth. 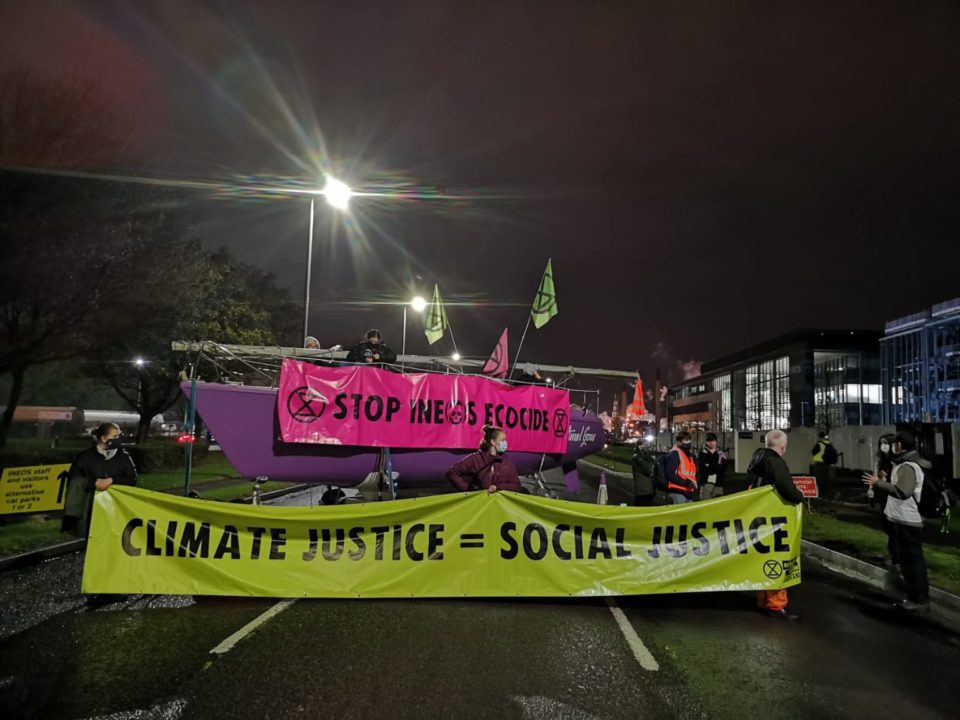 The Extinction Rebellion protesters parked a purple boat, draped with banners, at the Bo’ness Road gate.

Another was parked at the company’s office on Inchyra Road, with a further demonstration planned outside the London office.

Extinction Rebellion members said they were “running out of time” in the fight against climate change and called for a transition to a greener society.

One campaigner, from Glasgow, accused Ineos in Grangemouth of being “Scotland’s largest climate polluter”.

She added: “We are running out of time, with the climate crisis affecting so many in the global south already.

“If Scotland really wants to be the ‘climate leaders’ they claim to be, we need to see a just transition to a greener and fairer society, led by ordinary people.”

Another woman, from Edinburgh, said: “The government, big oil and big finance companies have outwardly promised for decades to reduce our destruction of the climate, whilst continuing to profit from it.

“We cannot continue to believe they will solve this crisis they created for their own gain: we need a people-led, worker-led solution, made for the people, by the people – not for profit by the profiteers.”

Ineos said between 2009 and 2019, CO2 emissions from the Grangemouth site had reduced by 37% and from the chemicals business by 43%.

A spokesman added: “Ineos products are used in a wide range of every day and essential items, currently protecting frontline healthcare professionals and their patients, whether through the use of PPE or the application of medicines to treat the effects of the pandemic and the development of antiviral drugs. The use of plastics has been invaluable during these unprecedented times.

“Our sites continue to explore ways to reduce our emissions. At the end of September, Ineos announced the largest ever purchase contract of wind energy for heavy industry in Belgium.

“The deal will reduce annual emissions by 115,000 tonnes of CO2 each year starting from next year – the equivalent of taking 100,000 cars off the road each year.

“As more and more energy-intensive manufacturing industries in Scotland close down, then it is inevitable that those which the Scottish economy so heavily rely on will stand out above the rest in terms of their emissions.

“Observers should be left in no doubt: manufacturing products in the UK we rely on every day, every week, every year reduces carbon footprint from importing such items, ensures compliance with the strictest environmental and safety standards and delivers carbon savings through their applications, ‘light-weighting’ vehicles, components for wind turbines and so on.

“We do our utmost to do this as efficiently (and environmentally responsibly) as possible – because this is how we will remain in business.”

The latest incident follows a number of stage protests from Extinction Rebellion, including dumping mounds of manure outside BP’s Aberdeen headquarters and scaling the Scottish Parliament building in Edinburgh.

Superintendent Simon Jeacocke said: “At around 6.30am on Friday, a number of individuals began a demonstration and road blockade at the Ineos petrochemical refinery in Grangemouth.

“Officers quickly responded to the scene and engaged with those in attendance, who confirmed their intention to hold a peaceful protest.

“An agreement was reached to allow the demonstration to take place until 2pm at which time, all demonstrators were required to leave the area.

“A full traffic management plan was set up to allow the continued flow of traffic in and out of the facility and to minimise disruption to the public.

“At 2pm, the group informed police that they did not wish to leave the area and as a result, 12 people have been arrested.

“In addition, two sailing boats and various other items used to create the roadblock have been seized. Reports will be submitted to the Procurator Fiscal and the road will be fully reopened in due course.”