Cars could be banned from Edinburgh’s George Street

Final proposed concept designs for the transformation of Edinburgh’s historic George Street have been unveiled. 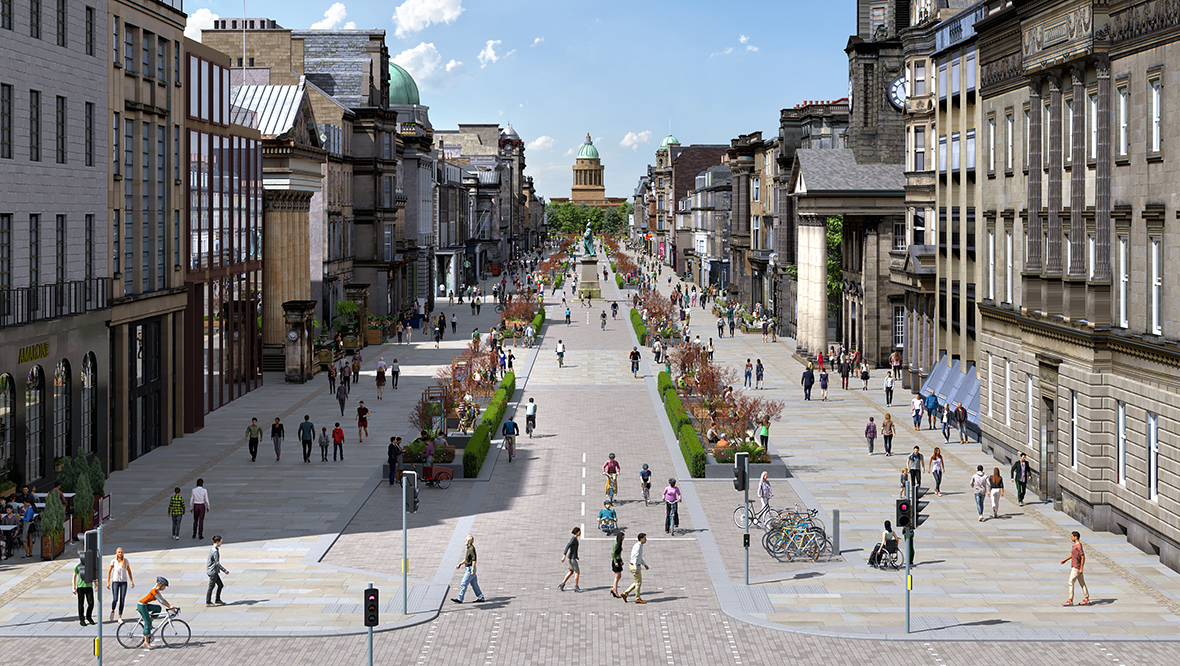 Cars could be banned from one of the busiest thoroughfares in Edinburgh as part of radical transformation plans to open up the space for pedestrians, bikes, and outdoor seating areas.

George Street, which lies parallel to Princes Street and runs from St Andrew Square to Charlotte Square, would be largely car-free if the project is given the go-ahead.

The plans say the street will be given a ‘European boulevard feel’ to better accentuate the A-listed buildings that adorn it.

Bus stops will be located at either end of the city centre, and car parking will remain for blue badge holders and for loading access for businesses.

The visualisation also includes widened pavements, landscaped spaces for play and relaxation, and a cycling thoroughfare.

It is intended to begin construction work on the scheme in 2023, with anticipated completion in 2025.

Lesley Macinnes, convener of the council’s transport committee, and SNP councillor for Liberton and Gilmerton, said: “These animated concept designs offer an exciting glimpse into what George Street and the surrounding area could look like in 2025 – a welcoming, relaxing and unique space, where people will want to spend time, to visit local shops, cafes and restaurants and to travel to and through the city centre.”

A detailed artist’s impressions and a 3D fly-through have been released to illustrate how the street and surrounding area within the UNESCO World Heritage Site could look under the George Street and First New Town Public Realm Improvements Project.

The project is expected to cost £32m, with £20m from Transport Scotland via Sustrans.

Edinburgh City Council first agreed to increase pedestrian space in the city centre in 2013 and, beginning in 2014, a new layout was trialled for 18 months on George Street.

Since then design principles have been developed and the project was widened to include the interconnecting Castle, Frederick and Hanover Streets and the junctions with Charlotte and St Andrew Squares.

“This includes the forthcoming Meadows to George Street and City Centre West to East Link schemes, which will transform walking, wheeling and cycling routes, and connections across the city centre.

“These schemes also support the City Mobility Plan, a ten-year strategy to overhaul transport and mobility in the capital to deliver a sustainable, net-zero carbon and inclusive future.”

Further consultation with key stakeholders is set to take place over the next month; the outcome of which will inform a final design proposal, set to be brought before the council’s transport and environment committee in April.

The required statutory processes under which the scheme will be constructed would then begin in the summer.

Simon Strain, Interim Head of Infrastructure Delivery for Sustrans Scotland said: “George Street is one of the most vibrant and distinctive shopping streets in Scotland.

“We are pleased to be supporting the increased space for walking, wheeling and cycling that this project will create, upgrading one of the city’s key travel routes.

“The new spaces for sitting and relaxing provide both visitors and residents with comfortable spaces where they can rest and enjoy the World Heritage Site.”