Boy immortalised in pages of picture book penned by mum

Devon Peek wrote The Boy in the Stars after her son Dax died of an aggressive brain tumour last year. 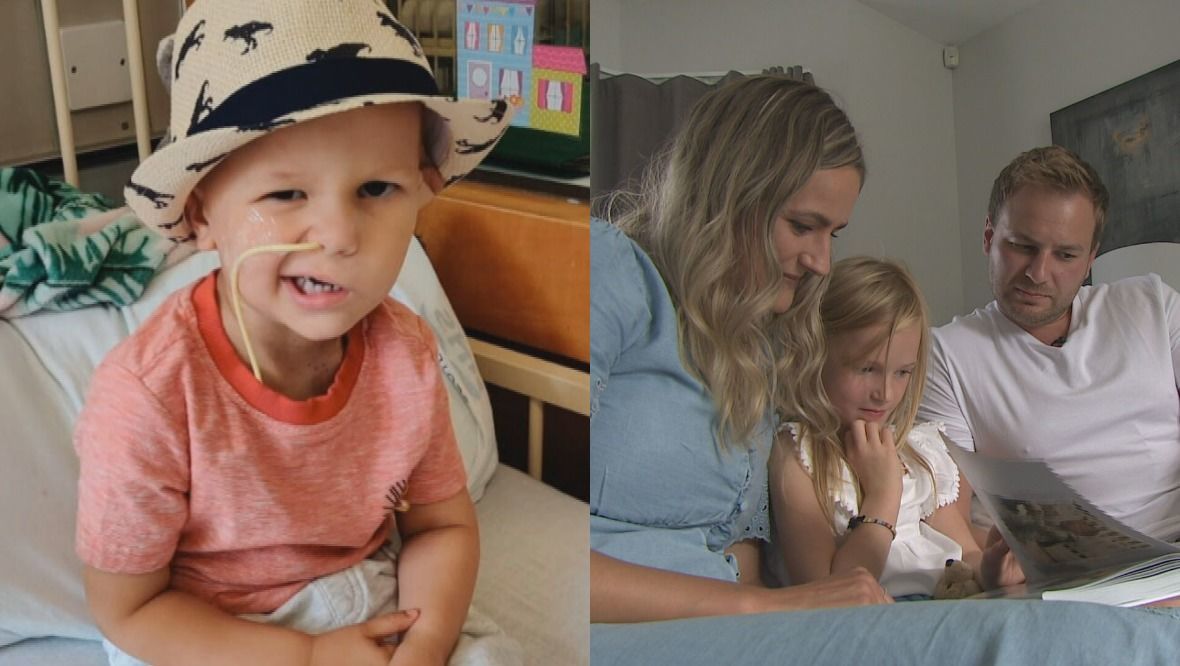 A little boy who died of an aggressive brain tumour has been forever immortalised in the pages of a picture book written by his mother in a bid to help other bereaved families.

Dax Peek was just two years old when his parents Devon and Jonny were given the devastating diagnosis after noticing the left side of his face had drooped during a family holiday to Disneyland Paris last year.

“We were told it was a cancer that is rare, but really chemo respondent so we were really hopeful we would get Dax through this and out the other side,” Devon said.

“But his tumour was a bit of a monster that didn’t want to give in.”

The couple were forced to take it in shifts to support their son during treatment in hospital and their six-year-old daughter Darcie at their home in Dunbar, East Lothian.

Darcie was unable to visit her baby brother in hospital due to coronavirus restrictions and would only see him during brief hospital breaks in the park.

“During lockdown, she wasn’t allowed in the hospital to see him so that was really difficult and he really missed her a lot,” said Devon.

“He had little photos next to his cot and he would tell the nurses about her.”

Jonny added: “We were honest with Darcie from the very beginning and told her everything that was happening and kept her really informed.

“She’s been remarkable in how she’s coped.”

Despite the best efforts of doctors, the family decided to bring Dax home from the hospital and spend the precious few weeks they had left with him together.

“In the middle of July we stopped treatment and got him home and we had a fantastic time at home until he passed at the end of August,” Jonny said.

The devastating loss of their son led Devon to story writing as a way of coping with her grief.

“Before Dax had become ill I had written children’s stories, I had never done anything with them though, it was just something I enjoyed,” Devon said.

“I found writing really therapeutic and as a coping mechanism to get me through this and after he passed, I just saw it as not only a way for me to cope but as a way to honour Dax.”

Devon went on to pen The Boy in the Stars, a magical picture book that aims to help children with grief and loss.

“Whenever someone passed in our family, we always described them as being in the stars, so at night time we can go out and look at them and say hi to them,’ Devon explained.

“The idea came from there, because that’s how we described where he went.

“It’s about Dax, he’s the main character, the family in the story is based on us and it has a sad story but it also has a magical feel of where Dax has gone and hopefully that can give children experiencing grief a nice outlook on where their loved one might be.

Jonny added: “A lot of books that we got to look at and to help and to read went down some religious paths and obviously not everyone has got the same beliefs.

“I think for us it was quite important to say he hasn’t just disappeared, his spirit and everything has gone somewhere.”

The book shows Dax in his favourite pyjamas alongside his toy dog and explains how he lives amongst the stars, drawing shapes in the clouds for his family.

The book has been a comfort to the couple’s daughter Darcie, who likes to look at the illustrations of her brother.

“It makes me think about my brother. I like him being in the book, I like seeing his name,” she said.

Devon says the reaction to The Boy in the Stars has been wonderful and that she feels “very proud” of her son and how his story is helping other families in their grief.

“It’s a really nice feeling to know that Dax is in people’s hearts and also on people’s bookshelves in their homes,” she said,

“It’s nice hearing their messages and stories about how the book has helped them and hearing what they’ve went through. It’s an honour to have people telling us their stories.

“It’s brought me a lot of peace, I kind of feel like I’ve put Dax into a book for him and a book can last as long as you want a book to last, it can last forever.